Electronic nose better at sniffing out disease-carrying dogs in Brazil 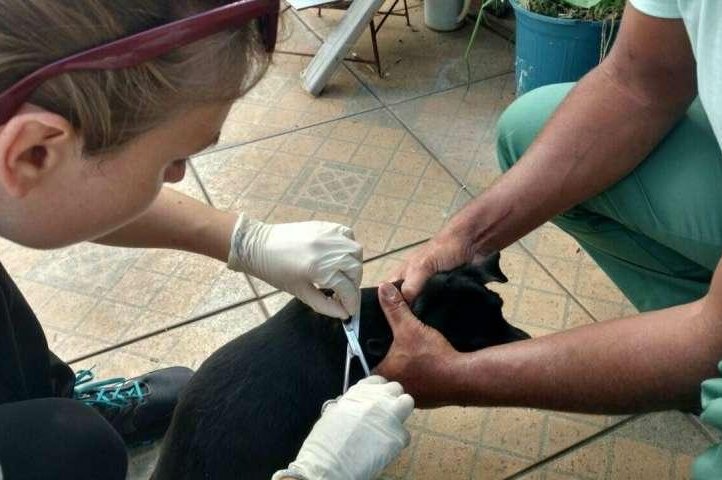 Health officials snip hair from a dog in Brazil for analysis using an electronic nose. The technology can help identify carriers of the parasite that causes Leishmaniasis, a disease that kills thousands of Brazilians each year. Photo by Lancaster University

March 1 (UPI) -- Scientists have developed a new, more accurate electronic nose designed to sniff out dogs carrying Leishmaniasis, a deadly disease that kills some 3,500 people in Brazil every year.

"We collect some hair from the dog and test it in our kit which we call an electronic nose. This can sniff the odor of the hair and, it can tell if the dog is infected or not," Gordon Hamilton, professor of medical entomology and vector control at Lancaster University in England, said in a news release.

The electronic nose uses spectroscopic imaging to identify the chemical patterns produced by a sample's volatile compounds. The device's computer processing analyzes the spectral signatures for patterns linked to an infection.

"It's important that our approach can detect the parasite even if the dog looks healthy. It's easy to spot a sick dog, the problem are the dogs which look well but aren't," Hamilton said.

There is currently no vaccine for Leishmaniasis, but infections can be treated with drugs. Infected humans typically present with skin lesions and ulcers, fever, low red blood cells and an enlarged spleen and liver.

Researchers described their electronic nose in a new paper published this week in the journal BioRxiv. Hamilton and his colleagues hope to eventually train the electronic nose to detect other tropical disease, including malaria, trypanosomiasis and Chaga's disease.

Scientists in the United States and elsewhere are working to improve the sensitivity, accuracy and cost-effectiveness of electronic nose technology, with the hope that it could be more widely adopted by the healthcare field and used to remotely diagnose a range of diseases, from the flu to diabetes.