Methane seeps could provide a lifeline to bottom feeders if climate change reduces the supply of phytoplankton. 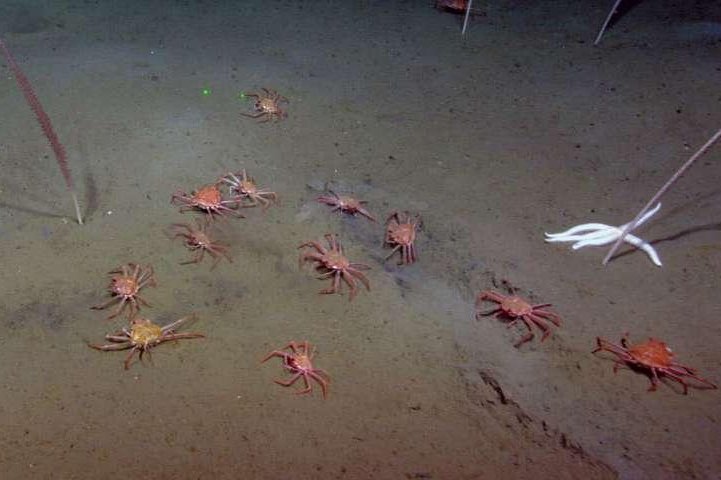 Feb. 20 (UPI) -- Marine biologists have discovered a group of tanner crabs feeding vigorously on a seafloor methane seep located off the coast of British Columbia.

Tanner crabs are a genus of crabs sometimes referred to as queen crabs or spider crabs. All seven species of the Chionoecetes genus are often marketed as "snow crabs" in seafood markets. The discovery marks the first time a commercially harvested marine species has been observed feeding on a methane vent.

Bottom-feeders like tanner crabs -- and the entirety of the ocean floor food chain -- were thought to rely exclusively on phytoplankton descending through the water column, but the latest research suggests seafloor ecosystems host diverse sources of energy and basal nutrition.

"Tanner crabs likely are not the only species to get energy from methane seeps, which really haven't been studied all that much," Andrew Thurber, a marine ecologist at Oregon State University, said in a news release. "We used to think there were, maybe, five of them off the Pacific Northwest coast and now research is showing that there are at least 1,500 seep sites -- and probably a lot more."

Efforts to map methane seeps have revealed vents in a variety environments, deep and well shallow waters. Scientists estimate there are likely thousands of undiscovered methane vents in the Arctic.

Scientists were first compelled to study crabs congregating at methane vents after watching a specimen get literally carried away by the rising gas.

"This project came about from our observing a crab getting lifted off the seafloor by methane building up in an ice like form on its chest before the methane floated away and dropped the crab on its head," Thurber said. "That entertaining video was the genesis for this project and led us to add to our understanding of the link between the deep and society."

Observations of the tanner crabs' behavior around the methane seeps didn't reveal any uniform styles of consumption, but many of the crabs were seen digging through the sediments surrounding the vents. It's likely the crabs are eating the mats of methane-eating microbes that form around the seafloor vents.

"Despite observing tanner crabs feeding at the sites on multiple occasions, there wasn't much evidence animals eating methane using established methods," said study lead author Sarah Seabrook, who is an Oregon State Ph.D. candidate. "So we looked into it more deeply and found chemical evidence of methane tracers in their guts, and biogeochemical evidence in their tissues. It does raise a question of whether we can apply these new techniques to other species and find out if the use of methane seeps as a food source is more widespread than just tanner crabs."

Whereas plankton supplies vary with the seasons, methane vents are constantly bubbling. Scientists predict climate change will diminish the amounts of phytoplankton that filter down to seafloor food webs. If true, bottom-dwellers like tanner crabs will be forced to rely more heavily on alternate sources of energy. Methane seeps could provide a lifeline.

RELATED Greenland's ice sheet is emitting a lot of methane

Scientists suggest more work must done to characterize the importance of methane vents for seafloor food chains and ecosystems. The latest evidence -- published this week in the journal Frontiers in Marine Science -- suggests more should be done to ensure methane vents are protected and not disrupted by human development.

Sea snail shells are dissolving as the ocean gets more acidic

Science News // 3 days ago
Mars, meteors: December's must-see astronomy events
December features the longest nights of the year, and the final month of 2022 will be packed with astronomical happenings ranging from the most active annual meteor shower to the best views of Mars since 2020.

Science News // 4 days ago
NASA awards contract for 3D-printed construction on moon, Mars
Nov. 29 (UPI) -- Texas-based startup ICON has landed a five-year, $57 million contract from NASA to 3D-print landing pads, roads and shelter on the moon and on Mars.