"All living creatures on our planet, including us humans, suffer from artificial nighttime lighting," researcher Alejandro Sánchez de Miguel said.

Feb. 18 (UPI) -- Scientists have developed a new technique for studying light pollution using the photographs snapped by astronauts aboard the International Space Station.

NASA maintains a public database featuring more than 1.3 million color photographs taken by astronauts over the last 15 years. Researchers in Europe developed a method for mining and calibrating the spectral data embedded in each photo, and using the data to gauge the environmental impact of light pollution.

"We hope to take photography from the Space Station to a new level," Alejandro Sánchez de Miguel, research fellow at the University of Exeter, said in a news release.

As numerous studies have shown, artificial light can disrupt the behavioral patterns of nocturnal animals. Light pollution also influences the behavior of diurnal species that begin their day just before dawn. Artificial light causes birds to fly towards dangerous city skylines and fish to act bolder in open water.

One recent study showed the majority of key wildlife areas around the world are affected by light pollution.

"This is not only about being able to see the stars," said Alejandro. "All living creatures on our planet, including us humans, suffer from artificial nighttime lighting. And only the humans living off planet Earth can help us."

RELATED Researchers find the source of black carbon in the Arctic

For the newest study, published in the journal Remote Sensing of the Environment, scientists used a unique mathematical technique to analyze the colors in the photographs and identify different light sources.

Additional calculations allowed scientists to estimate how different colors and levels of artificial light suppress melatonin levels and drown out the stars.

"We provide a basis for creating risk maps of artificial lightning," said Alejandro. "Governments could use this information to reduce light pollution." 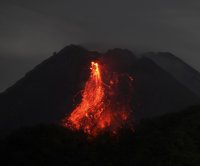 Science News // 20 hours ago
Magma analysis reveals why some volcanoes more dangerous than others
June 24 (UPI) -- Changes in magma prior to eruptions make Indonesia's volcanoes among the most dangerous in the world, according to a study published Thursday by Nature Communications.

Magma analysis reveals why some volcanoes more dangerous than others