"We used the same worldwide dataset as earlier researchers but thoroughly vetted every fossil occurrence, and found that most of the dates had several problems," vertebrate paleontologist Robert Boessenecker said in a news release. 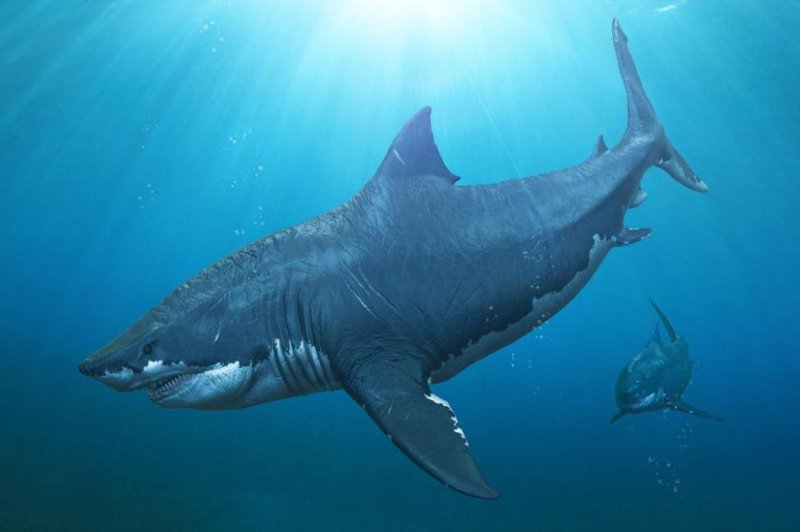 Megalodon, the largest shark in Earth's history, went extinct some 3.6 million years ago, according to new research. Photo by Herschel Hoffmeyer/Shutterstock

The research showed legitimate megalodon fossils can be found up until the end of the early Pliocene, 3.6 million years ago. Megalodon fossils recovered from rocks younger than early Pliocene deposits, scientists determined, either migrated from separate fossils sites or eroded from older strata.

"We used the same worldwide dataset as earlier researchers but thoroughly vetted every fossil occurrence, and found that most of the dates had several problems -- fossils with dates too young or imprecise, fossils that have been misidentified, or old dates that have since been refined by improvements in geology; and we now know the specimens are much younger," Robert Boessenecker, vertebrate paleontologist at the College of Charleston, said in a news release. "After making extensive adjustments to this worldwide sample and statistically re-analyzing the data, we found that the extinction of O. megalodon must have happened at least one million years earlier than previously determined."

Between 1 and 2.5 million years ago, several unusual marine species, including early seals, walruses, sea cows, porpoises, dolphins and whales, also went extinct. Previously, scientists linked the disappearance of megalodon with the mass extinction event. The new research -- published this week in the journal PeerJ -- suggests the demise of the ancient predator shark was unrelated.

With the timing of megalodon's disappearance shifted, scientists are now unsure whether the collection of marine extinctions constitutes a "mass extinction" designation.

"Rather, it is possible that there was a period of faunal turnover -- many species becoming extinct and many new species appearing -- rather than a true immediate and catastrophic extinction caused by an astronomical cataclysm like a supernova," Boessenecker said.

In their paper, scientists argue the arrival of the modern great white shark, Carcharodon carcharias, offers a better explanation for megalodon's downfall. The great white shark first appears in the fossil record some 6 million years ago. At first, the shark was relegated to the Pacific, but just 2 million years later, the predator had proliferated throughout Earth's oceans.

"We propose that this short overlap, 3.6 to 4 million years ago, was sufficient time for great white sharks to spread worldwide and outcompete O. megalodon throughout its range, driving it to extinction -- rather than radiation from outer space," Boessenecker said.

Science News // 4 hours ago
Engineers unveil solar-powered AI system-on-chip
June 17 (UPI) -- AI systems typically use lots of energy and rely on the cloud, which presents IT security issues. Scientists in Switzerland have addressed these problems by squeezing an AI system onto a single computer chip.