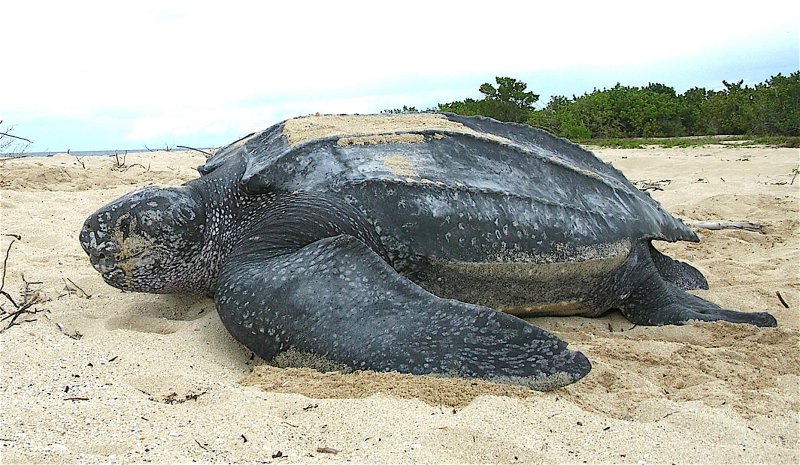 Researchers say humans are hunting large animals out of existence, with consumption as the biggest reason for the killing, though many animals that are not being hunted die as part of human hunting practices. Pictured, a leatherback sea turtle. Photo courtesy of Oregon State University

According to a new study published this week in the journal Conservation Letters, meat-eating is to blame for the shrinking populations of at least 200 large animal species. At least 150 of those species are facing the threat of extinction.

"Direct harvest for human consumption of meat or body parts is the biggest danger to nearly all of the large species with threat data available," William Ripple, distinguished professor of ecology at Oregon State University's College of Forestry, said in a news release. "Thus, minimizing the direct killing of these vertebrate animals is an important conservation tactic that might save many of these iconic species as well as all of the contributions they make to their ecosystems."

Ripple and his colleagues lowered the threshold for which species qualify as megafauna. Scientists classified all mammals and fish over 220 pounds, as well as all amphibians, birds and reptiles over 88 pounds, as "large animal" species.

"Those new thresholds extended the number and diversity of species included as megafauna, allowing for a broader analysis of the status and ecological effects of the world's largest vertebrate animals," Ripple said. "Megafauna species are more threatened and have a higher percentage of decreasing populations than all the rest of the vertebrate species together."

An analysis of megafauna over the last 500 years showed humans have hunted roughly 2 percent of large animals to extinction. The trend continues today, researchers warned in their paper.

Though hunting for consumption remains the largest threat, the use of animal parts in traditional medicine -- primarily in Asia -- also works to shrink megafauna populations.

"In the future, 70 percent will experience further population declines and 60 percent of the species could become extinct or very rare," Ripple said.

Not all the large animals threatened by meat consumption are prized by hunters. Some threatened species are simply collateral damage, caught in snares or fishing nets. Many large species also suffer as the result of pollution and habitat loss.

As livestock operations expand, and more land is needed to grow food to feed cattle, pigs and other animals, forests and fields are converted, robbing large animals of the acreage they need to hunt and maintain healthy populations.

Many of Earth's largest species are genetically unique, like the Chinese giant salamander -- one of only three living species representing a family with a lineage that can be traced back more than 170 million years. The salamander's extinction is fast approaching.

"Preserving the remaining megafauna is going to be difficult and complicated," Ripple said. "There will be economic arguments against it, as well as cultural and social obstacles. But if we don't consider, critique and adjust our behaviors, our heightened abilities as hunters may lead us to consume much of the last of the Earth's megafauna."

Science News // 3 hours ago
Humans have been bonding with cats for thousands of years
That special link you may have with a purring, four-legged friend has been going on between the species for millennia, new research shows.

Science News // 3 hours ago
More Americans are moving to areas where wildfire risk is high
Some Americans appear to be moving from areas with frequent hurricanes and heat waves to places threatened by wildfire and rising heat.

Science News // 5 hours ago
Thursday night will be best chance to see Mars in 2022
Mars will reach opposition on Thursday night, making it one of the best nights of 2022 to see the planet glow in the sky.

Science News // 22 hours ago
Oldest DNA shows Greenland once was home to forested ecosystem
Dec. 7 (UPI) -- DNA sequences dating back 2 million years, the oldest ever obtained, suggest that the northeastern tip of Greenland was once home to a forested ecosystem unlike any now found on Earth.

Science News // 1 day ago
Australian researchers find 100 million-year-old fossil in Queensland
Dec. 7 (UPI) -- Australian paleontologists said on Wednesday they have discovered the complete skeleton of an ancient large, long-necked marine reptile in the Queensland desert that is about 100 million years old.

Science News // 1 day ago
Mars to disappear behind final full moon of 2022
A cosmic vanishing act is about to unfold in the night sky as the full moon passes directly between the Earth and one of its planetary neighbors  Wednesday night.

Science News // 2 days ago
Archaeologist claims human relative used controlled fire for light, cooking
Dec. 6 (UPI) -- South African archaeologists say they have proof that a close relative of humans used fire for both light and cooking meat, despite having a much smaller brain than ours.

Oldest DNA shows Greenland once was home to forested ecosystem