Mites, not a virus, are the main threat to bees, study finds

"Our work therefore changes our understanding of the effect Varroa has on Deformed Wing Virus and the health of honey bee colonies," researcher Madeleine Beekman said. 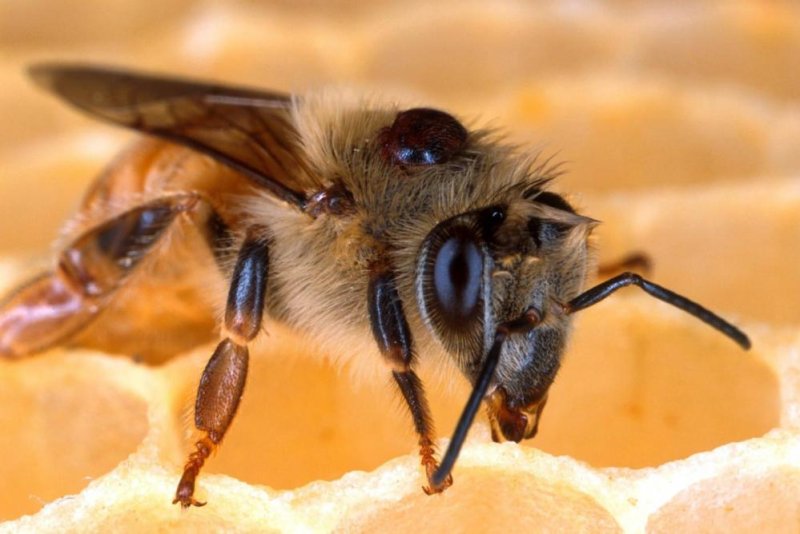 A honey bee with a Varroa mite on its back. Photo by Pixabay

Jan. 30 (UPI) -- Several studies have suggested parasitic mites both spread and worsen the effects of Deformed Wing Virus among honey bees. But new research shows the link between the two threats is tenuous.

In a new study published in the Proceedings of the Royal Society B: Biological Sciences, scientists in Australia argue mites pose the greater threat to honey bee health. The virus, they say, is mostly an innocent bystander.

"The prevailing wisdom is that the mite selects for very virulent strains of the virus," Madeleine Beekman, professor of environmental sciences at the University of Sydney, said in a news release. "For that reason, the virus is now known as a very dangerous virus and the Australian beekeepers are adamant this virus should not get into the country. In fact, there is legislation that prevents the import of any bee products that could contain the virus."

To better understand the relationship between the Varroa mite, a tissue-eating parasite, and deformed wing virus, scientists injected bee pupae with large amounts of the viral strain carried by mites.

Researchers have previously hypothesized that mites transmit a stronger version of the virus. But the latest lab tests showed the mite actually does the opposite. The strain transmitted by mites surpasses deadlier viruses, including the Sacbrood Virus and Black Queen Cell Virus.

"Our work therefore changes our understanding of the effect Varroa has on Deformed Wing Virus and the health of honey bee colonies," Beekman said. "It means we don't have to be scared of the virus. Instead we need to focus on eliminating the mite and reducing its numbers."

Australia is currently the only place in the world where honey bees remain mite-free. As a result, the country's honey is free of the traces of chemicals used to combat mite infections. However, most scientists believe it's only a matter of time before mites make their way Down Under. Beekeepers, researchers argue, need to start preparing for that inevitability.

"Many countries actively select for honey bee populations that can tolerate the Varroa mite without treatment. Australian beekeepers would like to import the sperm from such populations to start preparing their honey bees for when the mite arrives," Beekman said. "But the importation of the sperm is currently forbidden because of the threat of Deformed Wing Virus, which can be present in bee sperm. Perhaps beekeepers can now convince the authorities that bee sperm is safe."

The takeaway from the new study, according to Beekman and her colleagues, is that both beekeepers and researchers need to focus their efforts on combating the Varroa mite, not Deformed Wing Virus.

Science News // 31 minutes ago
Miner unearths nearly complete mummified baby woolly mammoth in Canada
A young miner called for backup when his front-end loader unexpectedly struck something in the Canadian permafrost last week on the first day of summer in the Northern Hemisphere.

Science News // 4 days ago
Bipartisan group defends sequoia tree bill in California despite opposition
June 23 (UPI) -- A bipartisan trio of lawmakers defended the "Save Our Sequoias Act" on Thursday despite more than 80 environmental groups signing a letter to Congress opposing the act earlier this month.

Science News // 6 days ago
Chinese official says its Mars sample mission will beat NASA back to Earth
June 21 (UPI) -- A senior Chinese space official said on Monday the country is on track to bring back rocks from the surface of Mars two years ahead of the planned joint effort by NASA and the European Space Agency to do the same thing.