"Global warming superimposed upon the AMO is likely to alter the now familiar patterns we have seen in bluefin tuna over the last four centuries," said researcher Gregory Beaugrand.

Jan. 7 (UPI) -- Bluefin tuna are showing up in European waters in increasing numbers.

While conservationists and recreational anglers were debating whether or not the endangered fish species should be caught, scientists in France were trying to figure out why they're relocating.

Models designed by the researchers suggest the bluefin tuna's disappearance and reappearance in European waters can be explained by the Atlantic Multidecadal Oscillation, or AMO, a climate cycle driving sea surface temperature changes in the North Atlantic Ocean.

Scientists designed a model to interpret the relationship between AMO patterns and the distribution and abundance of bluefin tuna based on commercial catch rates and scientific observations. Their data suggests the AMO's current positive phase, increasing sea surface temperatures in the North Atlantic, best explains the fish's return to the waters surrounding the United Kingdom.

"The ecological effects of the AMO have long been overlooked, and our results represent a breakthrough in understanding the history of bluefin tuna in the North Atlantic," Robin Faillettaz, researcher at the University of Lille, said in a news release.

Researchers published their findings this week in the journal Science Advances.

Researchers worry the amplifying effects of global warming could accelerate the current AMO positive phrase. An accelerated disruption of the bluefin tuna's current recruitment grounds in the Mediterranean could lead to a decrease in the Atlantic's tuna population.

"Global warming superimposed upon the AMO is likely to alter the now familiar patterns we have seen in bluefin tuna over the last four centuries," said researcher Gregory Beaugrand. "Increasing global temperatures may cause Atlantic bluefin tuna to persist in the Nordic region and shrink the species distribution in the Atlantic Ocean, and it may even cause the fish to disappear from the Mediterranean Sea, which is currently, the most important fishery."

According to the study, the return of bluefin tuna to European waters isn't proof that the species is any less vulnerable than it was 10 years ago -- a lesson for both conservationists and fishing regulators.

"Our results demonstrate that local changes in Atlantic bluefin tuna abundance can reflect large-scale shifts in a species' distribution that are unrelated to improvements or worsening of a stock's abundance," Faillettaz said. "In this context we hope that our study will highlight the need to consider the environment when planning the sustainable management of all migratory fish species." 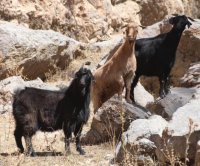