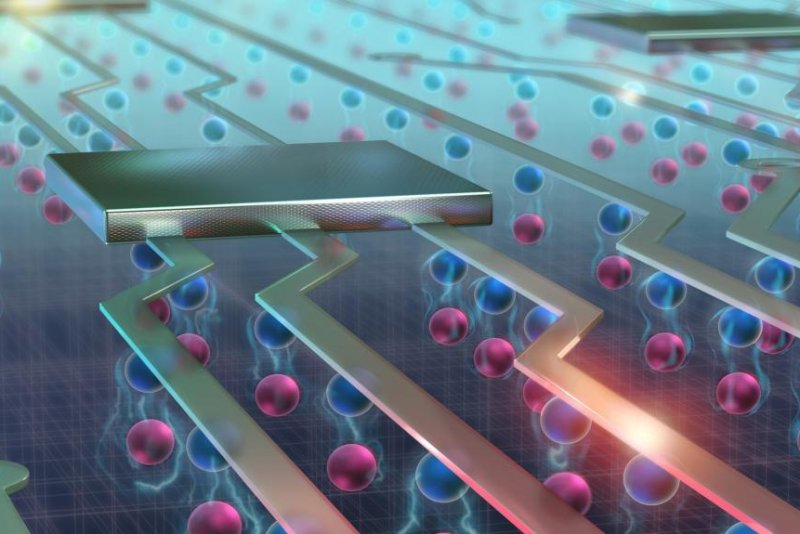 The manipulation of exciton flows could pave the way for a new generation of more powerful and efficient electronics. Photo by EPFL

Jan. 4 (UPI) -- Scientists have found a way to control exciton flows at room temperature, paving the way for the development of faster, more efficient electronics.

When an electron absorbs light, it gets bumped into a higher energy band. As quantum physics reveals, the newly energized electron leaves an "electron hole" behind. Because the high-energy electron has a negative charge and the hole has positive charge, the duo remain bound -- forming an exciton.

Excitons are only found in semiconducting and insulating materials, and their unique properties can be studied in 2D materials. Physicists regularly look for new quantum properties by combing 2D materials.

Recently, researchers in Switzerland layered tungsten diselenide with molybdenum diselenide, WSe2 with MoSe2, to create a new 2D metamaterial -- with new quantum properties. To test the combo's unique properties, scientists used a laser to excite the electron in the metamaterial, creating light beams with circular polarization.

Researchers at the Swiss Federal Institute of Technology in Lausanne, or EPFL, showed that by tweaking the layering of the two original 2D materials, scientists were able to create new interference patterns, altering the nature of the metamaterial's exciton behavior, and in turn, changing the polarization, wavelength and intensity of the light beams.

According to the new study, the patterning of the 2D materials works to change the energy difference between the electron and paired electron hole, which influences exciton flows. Scientists call this energy difference a "valley."

Researchers described their newest valley-manipulation techniques in the journal Nature Photonics. Authors of the new paper think the control of valleys and their impact on exciton flows could be "leveraged to code and process information at a nanoscopic level," paving the way for a new generation of more powerful and efficient electronics.

"Linking several devices that incorporate this technology would give us a new way to process data," Andras Kis, head of EPFL's Laboratory of Nanoscale Electronics and Structures, said in a news release. "By changing the polarization of light in a given device, we can then select a specific valley in a second device that's connected to it. That's similar to switching from 0 to 1 or 1 to 0, which is the fundamental binary logic used in computing."

Science News // 6 hours ago
Miner unearths nearly complete mummified baby woolly mammoth in Canada
A young miner called for backup when his front-end loader unexpectedly struck something in the Canadian permafrost last week on the first day of summer in the Northern Hemisphere.

Science News // 4 days ago
Bipartisan group defends sequoia tree bill in California despite opposition
June 23 (UPI) -- A bipartisan trio of lawmakers defended the "Save Our Sequoias Act" on Thursday despite more than 80 environmental groups signing a letter to Congress opposing the act earlier this month.