"The cost of outfitting a boat with a vessel tracking device and then purchasing data from a satellite company is far cheaper than deploying patrol boats," said researcher Darcy Bradley. 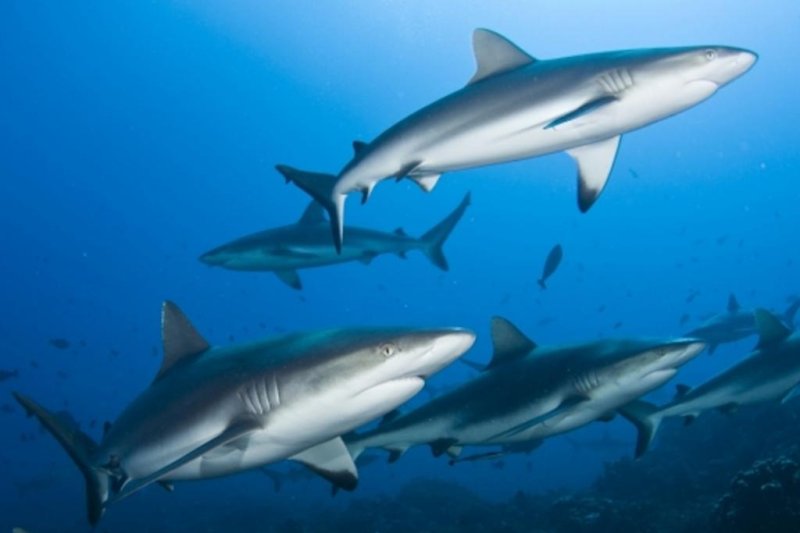 Even relatively healthy shark populations, including gray reef sharks, can be quickly harmed by illegal fishing. Photo by UCSB

Oct. 17 (UPI) -- Scientists from the University of California, Santa Barbara want to use satellite tracking technology to ensure shark sanctuaries around the world are true sanctuaries -- not hotbeds of illegal activity.

When Darcy Bradley and her colleagues at UCSB set out for the Marshall Islands, they intended to monitor the movements of grey reef sharks inside a supposed shark sanctuary. Instead, the team ended up surveying illegal shark fishing.

Of the 15 adult grey reef sharks scientists tagged with satellite trackers, eight were spotted moving across the Pacific at speeds significantly faster than a reef shark's top gear. The sharks had been illegally caught.

In 2011, the Republic of the Marshall Islands enacted significant shark protections, establishing a large sanctuary in the waters surrounding the Pacific island nation. Despite the island's commitment to shark conservation, illegal shark fishing continued.

Scientists realized good intentions and strong protections aren't enough. In order for a shark sanctuary to be a true sanctuary, monitoring and enforcement efforts must be strengthened.

"We aren't advocating for launching more satellites," Bradley, a doctoral candidate at UCSB's Bren School of Environmental Science and Management, told UPI. "We are suggesting expanding use of vessel tracking technology using the existing satellite array."

Bradley and her colleagues detailed their recommendations for effective monitoring and enforcement in a new paper published this week in the journal Conservation Letters.

But sharks fetch a considerable profit in markets throughout Asia. For many fishing boats, the money is worth the risk. Part of the problem may be that the risk is simply too low. Monitoring and enforcement can increase the odds of getting caught, scientists argue.

According to Bradley, satellite technology is the most cost effective way to boost monitoring and enforcement.

"We aren't advocating for launching more satellites; we are suggesting expanding use of vessel tracking technology using the existing satellite array," Bradley said. "The cost of outfitting a boat with a vessel tracking device and then purchasing data from a satellite company is far cheaper than deploying patrol boats."

All large vessels on the open seas are required to install automatic ship identification systems to prevent collisions. AIS data is publicly available through the Global Fishing Watch, an online platform for monitoring fishing activities.

But VMS tracking data remains proprietary. The keys to improved monitoring and enforcement, Bradley and her research partners contend, are broader agreements between sanctuary nations and more shared tracking data.

Tracking technology is still relatively new, so it's efficacy is still being measured. But early surveys suggest satellite monitoring can have a positive impact on sharks and other endangered species.