Bird feeders create a hierarchy, with larger species at the top 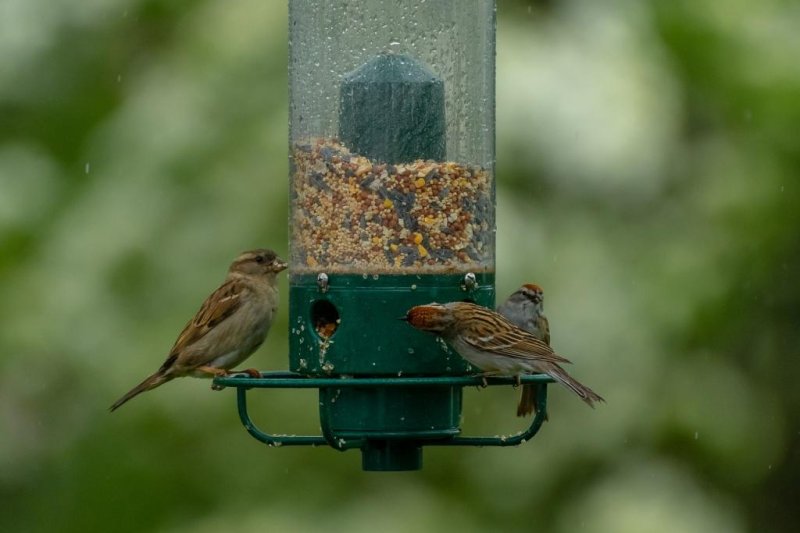 Sept. 6 (UPI) -- According to a new study, bird feeders trigger the formation of interspecies hierarchies. These localized hierarchies, the new research confirmed, are dominated by the biggest birds.

The presence of a consistent, concentrated source of food, like a bird feeder, naturally attracts a range of species -- species that may not ordinarily compete for the same resources.

To better understand how this act of charity effects bird communities, scientists at the University of Exeter and the British Trust for Ornithology monitored the feeding patterns of birds near bird feeders placed near hedges and woodlands.

"Our findings show that larger, heavier species get better access to food -- so if the aim of bird feeders is to benefit all species, we need to investigate ways to achieve this, such as different mixes of foods and feeder designs," Exeter ecologist Jon Blount said in a news release.

Blount and his colleagues measured dominance by observing interspecies interactions and noting which of the two species retreated, ceding access to the food. Dozens of interactions left researchers with a list of "winners" and "losers."

Researchers found a species' dominance was closely correlated with the species' weight.

"We know that during harsh weather the foods put out by homeowners can offer a lifeline but beyond this the benefits might be more subtle, so it is interesting that our findings are less straightforward and that more work needs to be done to fully understand garden bird feeding," BTO researcher Kate Plummer said.

Researchers published their findings this week in the journal PLOS One.

Science News // 2 days ago
Bipartisan group defends sequoia tree bill in California despite opposition
June 23 (UPI) -- A bipartisan trio of lawmakers defended the "Save Our Sequoias Act" on Thursday despite more than 80 environmental groups signing a letter to Congress opposing the act earlier this month.

Science News // 3 days ago
Megalodons were at very top of food chain, possibly cannibalistic, study says
June 22 (UPI) -- Megalodons, believed to be the largest species of shark that ever lived, were big enough to eat just about any animal they wanted -- and were possibly cannibalistic -- scientists say in a study published Wednesday.

Science News // 4 days ago
Chinese official says its Mars sample mission will beat NASA back to Earth
June 21 (UPI) -- A senior Chinese space official said on Monday the country is on track to bring back rocks from the surface of Mars two years ahead of the planned joint effort by NASA and the European Space Agency to do the same thing.

Science News // 1 week ago
Polar bears in Greenland adapted to hunt from glacial ice, study shows
June 17 (UPI) -- Scientists have discovered that a specific population of polar bears on Greenland have adapted to hunting from ice that has broken away from glaciers as global warming diminishes their natural hunting grounds on sea ice.