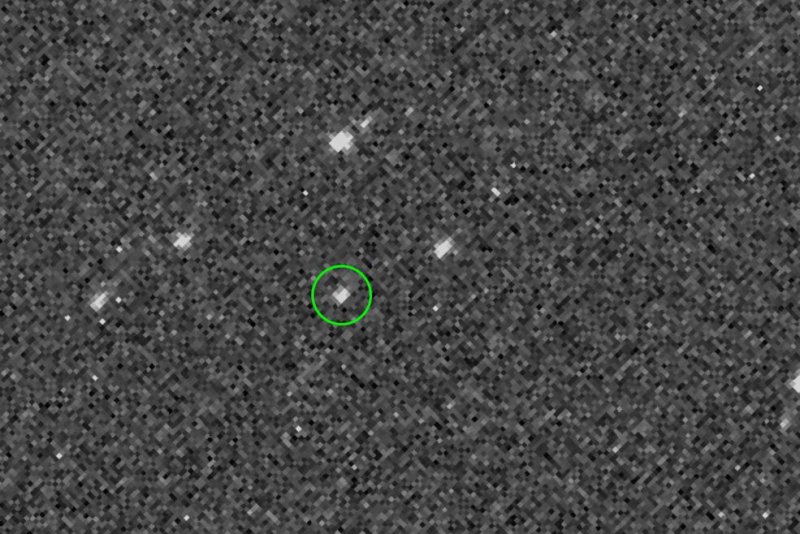 The asteroid Bennu, as seen from more than 1.4 million miles away. Photo by NASA/Goddard/University of Arizona

Last week, the spacecraft's PolyCam camera photographed the target asteroid Bennu from a distance of 1.4 million miles, inaugurating the asteroid operations campaign. Bennu appears as a blurry white speck in the grainy image.

"Many of us have been working for years and years and years to get this first image," Dante Lauretta, OSIRIS-REx principal investigator at the University of Arizona, told reporters during a press briefing on Friday.

The Security-Regolith Explorer spacecraft, which launched almost two years ago, boomeranged around Earth in 2017, setting the craft on its proper course. Now, Bennu, a carbonaceous asteroid in the Apollo group, is within view.

RELATED Earth passes perihelion, its closest point to the sun

"When we flew by the earth, the flyby changed the plane of our trajectory to align us with Bennu's orbit," Michael Moreau, OSIRIS-REx flight dynamics system manager at NASA's Goddard Space Flight Center, told reporters.

OSIRIS-REx is scheduled to reach Bennu on Dec. 2. Beginning in early October, OSIRIS-REx will execute a series of asteroid approach maneuvers.

"We plan to use our main engine thrusters to slow our velocity on our approach to Bennu," Moreau said.

As OSIRIS-REx approaches Bennu, the spacecraft's instruments and camera will observe the asteroid's size, shape and spectral properties. The probe and mission scientists will regularly search for plumes and natural satellites.

Once OSIRIS-REx reaches Bennu, the probe will conduct a series of flybys. The spacecraft will swoop by the asteroid's equator and poles. A few approaches will put the probe within 4.4 miles of the asteroid's surface. The flybys will allow the spacecraft and mission scientists to map the surface of Bennu in unprecedented detail.

Scientists will use the maps to perfect Bennu's orbit around the asteroid and to identify points of scientific interest. Most importantly, the data will help scientists choose where OSIRIS-REx will reach down with its robotic arm and scoop up regolith -- rocks and dust -- from Bennu's surface.

Scientists are interested in asteroids like Bennu for a variety of reasons. Researchers believe Bennu formed when the solar system was in its infancy, and that it's contents can offer clues to the chemistry of the early solar systems. Scientists think asteroids may have distributed water and prebiotic molecules -- the building blocks of life -- throughout the solar system, making life on Earth possible.

Bennu is also of interest due to the risk it poses to Earth. The 1,614-foot-wide asteroid has a 1-in-2,700 chance of impacting Earth during the 22nd century. Scientists at NASA and elsewhere are working to improve their ability to detect, track and predict the trajectories of potentially hazardous objects in space.

A variety of phenomena can alter the trajectory of an asteroid as it moves through space.

"We want to measure all of the forces that influence [Bennu's] orbital trajectory," Lauretta said.

In addition to giving scientists an understanding of how asteroids form and evolve, Lori Glaze, acting director of the Planetary Science Division at NASA Headquarters, said the study of space rocks like Bennu "will give us clues to ... what resources they may hold."

"Asteroids could serve as fuel depots across the solar system," Lauretta said.

But before NASA can execute deep space missions powered by interplanetary fuel infrastructure, scientists and engineers at the agency will need to navigate the difficulties of maneuvering a spacecraft around a misshapen, unstable space rock several million miles from Earth.

Science News // 3 days ago
NASA temporarily loses communication with Orion spacecraft
Nov. 23 (UPI) -- Communication between NASA's Mission Control Center in Houston and the Artemis I moon mission spacecraft was lost for 47 minutes Wednesday morning. A ground side reconfiguration resolved it, according to NASA.

Science News // 3 days ago
Study says the heaviest flying bird seems to self-medicate with plants
Nov. 23 (UPI) -- The great bustard actively seeks out medicinal plants that can kill pathogens, according to a study published Wednesday in Frontiers in Ecology and Evolution. The study suggests the large birds may be self-medicating.

Science News // 4 days ago
Europe's space agency reviewing space-based solar power
Nov. 22 (UPI) -- Solar power could be easier to harness from space, though the technology needed to beam it back to Earth is still in the developmental stage.

Ancient statues uncovered in Italy could rewrite part of history