The image is totally unexpected because you don't see it on the plate at all," researcher Madalena Kozachuk said.

A mini X-ray beam helped scientists recover hidden images, including the portrait of a woman from the 19th century, from degraded daguerreotypes. Photo by University of Western Ontario

To the naked eye, the portraits of a man and woman are unrecognizable. The daguerreotypes, taken as early as 1850, are too degraded by tarnish and wear. But researchers used rapid-scanning micro-X-ray fluorescence to see past the deterioration and recover the early images.

"It's somewhat haunting because they are anonymous and yet it is striking at the same time," Madalena Kozachuk, a PhD student in the chemistry department at the University of Western Ontario, said in a news release.

The images were analyzed at the National Gallery of Canada's photography research unit, where the daguerreotypes are stored.

"The image is totally unexpected because you don't see it on the plate at all," Kozachuk said. "It's hidden behind time. But then we see it and we can see such fine details: the eyes, the folds of the clothing, the detailed embroidered patterns of the table cloth."

The minuscule laser beam used in scanning the images produces an energy most sensitive to mercury absorption. Despite the degradation, mercury particles from the original image remain on the silver plates.

"By looking at the mercury, we can retrieve the image in great detail," said Tsun-Kong Sham, a researcher at the University of Western Ontario.

Kozachuk and Sham detailed their efforts in the journal Scientific Reports.

Scientist hope their ongoing work will illuminate the different ways daguerreotypes can be degraded and the best ways to clean them.

"A conservator's first step is to have a full and complete understanding of what the material is and how it is assembled on a microscopic and even nanoscale level," said John P. McElhone, former researcher at the Canadian Photography Institute of National Gallery. "We want to find out how the chemicals are arranged on the surface and that understanding gives us access to theories about how degradation happens and how that degradation can possibly or possibly not be reversed."

Science News // 14 hours ago
Fitbit-wearing baboons reveal price of social cohesion
July 27 (UPI) -- According to a new study, published Tuesday in the journal Proceedings of the Royal Society B, individual baboons must move at suboptimal speeds in order to maintain cohesion. 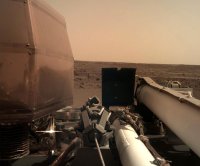