Britain was buried beneath ice sheets 2.5 million years ago 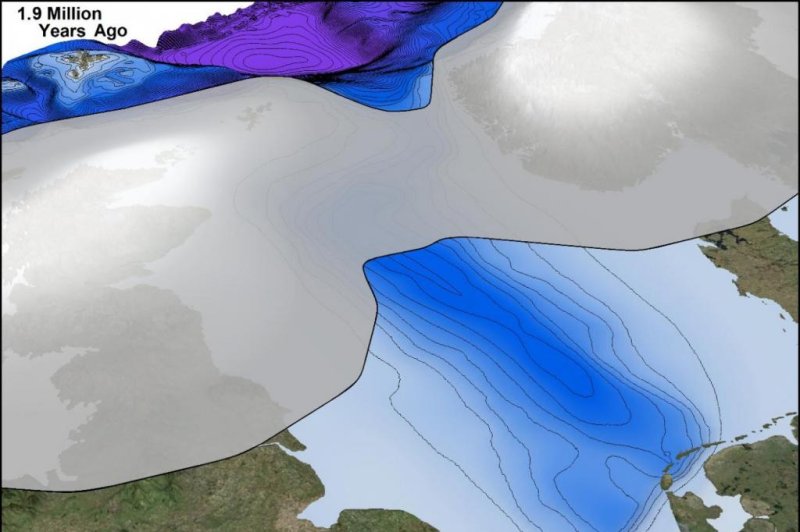 Ice from Britain and Scandinavia met in the middle of the North Sea some 1.9 million years ago. Photo by University of Manchester

June 14 (UPI) -- The British Isles were regularly buried beneath advancing ice sheets as early as 2.5 million years ago, more than 1 million years earlier than previously thought.

Until now, researchers thought ice sheets didn't advance across Britain until 1.1 million years ago, but new analysis of sediment cores and seismic data collected from deep beneath the North Sea suggests most of the North Atlantic islands were routinely covered in ice 1.4 million years earlier.

Ice sheets also covered Scandinavia, and as early as 1.9 million years ago, the ice sheets stretching across Britain and Northern Europe met at the center of the North Sea.

The North Sea was narrower and deeper during this period, like a giant fjord, and as ice advanced into the water, ice bergs measuring nearly 1,000 feet high were generated.

Britain wasn't always completely submerged beneath ice. The ice sheets retreated and advanced as the region experienced shifts in climate.

Scientists from universities across Britain and Europe used a multidisciplinary approach to trace the history of ice across the region.

"The North Sea basin has been subsiding for millions of years, continually preserving layer upon layer of evidence for past ice sheets, the evidence for which is not available onshore," University of Manchester scientist Rachel Harding said in a news release. "Using geophysical data we then searched these different layers for traces of long-disappeared ice sheets."

Researchers published the results of their analysis this week in the journal Science Advances.

"From these results we discovered that if you were to visit the North Sea 2.5 million years ago, Britain would have been under an ice sheet and you would have seen massive icebergs floating around the North Sea and as far south as the coast of the Netherlands," said Andrew Newton, researcher at Queen's University Belfast.