Scientists believe the majority of the ice sheet's mass loss over the last decade can be explained by the melting and retreat of coastal glaciers in West Antarctica. 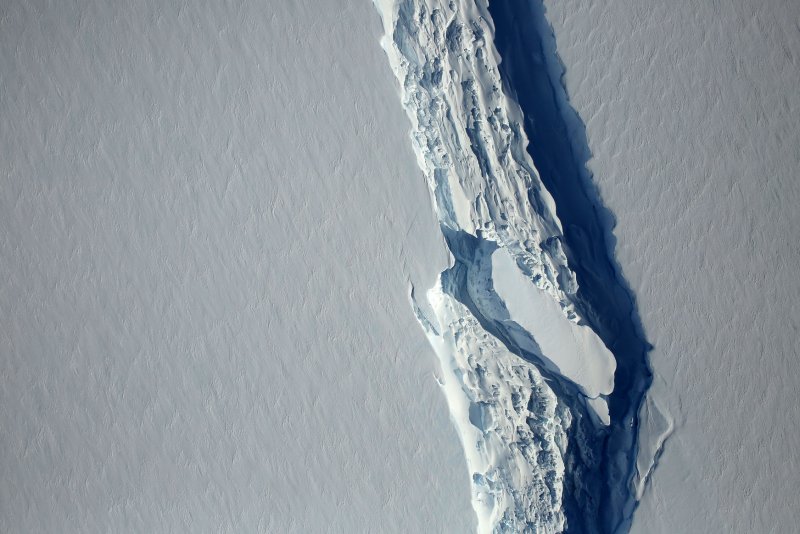 The breakdown of the West Antarctica ice sheet can bee seen from space. NASA Photo by John Sonntag/UPI | License Photo

June 14 (UPI) -- The loss of the Antarctic ice sheet is responsible for 7.6 millimeters of sea level rise since 1992, according to the latest assessment of the polar ice cap.

The Ice Sheet Mass Balance Inter-comparison Exercise, published this week in the journal Nature, offers scientists the most comprehensive and accurate picture of Antarctic ice loss.

"We have long suspected that changes in Earth's climate will affect the polar ice sheets," Andrew Shepherd, climate scientist at the University of Leeds, said in a news release. "Thanks to the satellites our space agencies have launched, we can now track their ice losses and global sea level contribution with confidence."

Scientists were able to produce a more complete picture of Antarctic ice loss by compiling data from a wide array of monitoring efforts.

"The added duration of the observing period, the larger pool of participants, various refinements in our observing capability and an improved ability to assess both inherent and interpretive uncertainties, each contribute to making this the most robust study of ice mass balance of Antarctica to date," said Erik Ivins, researcher at NASA's Jet Propulsion Laboratory in California.

Scientists believe the majority of the ice sheet's mass loss over the last decade can be explained by the melting and retreat of coastal glaciers in West Antarctica and along the Antarctic Peninsula.

Researchers worry that ice loss in Antarctica will continue to accelerate as the structural integrity of coastal glaciers, which helps protect inland ice from warmer ocean water, continues to breakdown.

RELATED Antarctica's grounding lines are retreating across the seafloor
RELATED Expect seas to rise for the next 300 years, new climate models warn

Antarctica has experienced increased snowfall over the last 200 years

Science News // 2 days ago
NASA releases images of DART collision with asteroid
Sept. 29 (UPI) -- NASA released pictures on Thursday of the collision between its Double Asteroid Redirection Test and an asteroid seven million miles away.

Science News // 3 days ago
New report finds 2022 'disastrous year' for melting Swiss glaciers
Sept. 28 (UPI) -- Glaciers in Switzerland melted at record rates in 2022, according to a report released Wednesday by the Swiss Glacier Monitoring Network, which labeled it a "disastrous year."

Science News // 3 days ago
Astronomers find new evidence of massive ancient stars
Sept. 28 (UPI) -- Astronomers have discovered what could be chemical evidence of the earliest stars in the universe with help from the Gemini North Telescope in Hawaii.

Science News // 3 days ago
Scientists say fossils showing ancient fins forerunners of arms, legs
Sept. 28 (UPI) -- Ancient fossils of a jawless freshwater fish appear to make a connection of the first sign of paired fins and the forerunner of arms and legs, researchers from China and Britain said in a new paper released Wednesday.
Advertisement