"It appears there is something special about the conditions in Minto Flats," said seismologist Carl Tate. 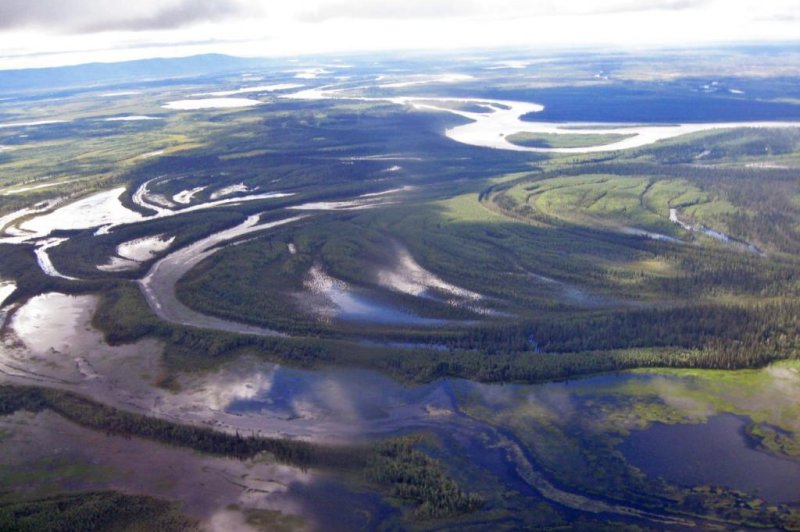 Beneath the lakes and rivers of central Alaska's Minto Flats are active fault lines. Photo by Carl Tape/UAF

June 5 (UPI) -- For the first time, scientists have observed the transition from a pattern of low-frequency rumbles into an earthquake -- a phenomenon previously only measured in the lab.

"Most earthquakes start abruptly, but not always," Luciana Astiz, an earth sciences program director with the National Science Foundation, which helped fund the research, said in a news release. "A fault zone in central Alaska monitored by new scientific instruments offers a look at a more complex process."

In 2015, seismic stations placed in central Alaska's Minto Flats recorded a series of long, low-frequency patterns. It was the signature of a seismic process usually only found deep in subduction zones. But here it was, just below the surface.

The seismic process revealed a gathering of seismic activity, nucleation, at a central point. However, the process did not lead to an earthquake, which is typically characterized by higher-energy waves called P and S waves.

In 2016, the seismic stations recorded another similar low-frequency sequence. This time, the 12-hour accelerating sequence preceded a magnitude 3.7 earthquake in the Minto Flats. The quake originated 10.5 miles beneath the surface.

"The rupture process started, then it found a patch of the fault that was ready to go, and that's what people have not seen. It's really exciting," said lead researcher Carl Tape, a professor at the University of Alaska Fairbanks' Geophysical Institute. "The leap we make, and maybe the more controversial thing, is that this emergent long-period signal only seen on top of the fault is a low-frequency signal that can sometimes turn into an earthquake and sometimes not."

Scientists witnessed a similar pattern in 2012, but their recording equipment wasn't able to separate the early signal from the larger rumbles of the quake. The early discovery inspired scientists to install more capable seismic sensors at the Minto Flats, making the latest breakthrough possible.

Tate and his colleagues published their work this week in the journal Nature Geoscience.

While studying the ways low-frequency waves can trigger or transition into full-scale ruptures could help scientists improve earthquake prediction models, researchers believe the patterns found at Minto Flats are unique to the region's fault complex.

"In some ways, I wish there wasn't anything special. I wish it was a global phenomenon that we discovered, but it's not," Tape said. "It appears there is something special about the conditions in Minto Flats."