Researchers at the University of Copenhagen who developed the model say it will allow scientists to better understand black holes. 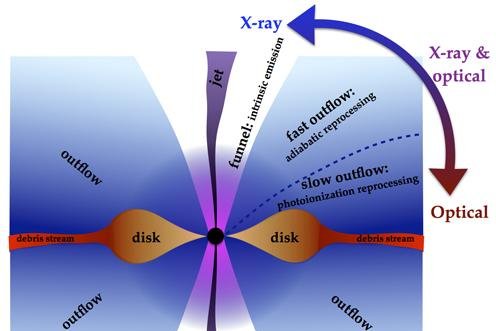 The figure shows what happens when material from a star is devoured by a black hole. There is too much material for it to pass into the black hole at once, but it is heated up in the process and emits light and radiation visible from earth. Photo courtesy of the Niels Bohr Institute

May 30 (UPI) -- A new computer model shows what it looks like when a supermassive black hole tears a star apart.

The phenomenon is known as a tidal disruption event, or TDE, and they're difficult to observe because black holes don't give off light or radiation -- except when something is pulled into the extremely strong gravitational field of one.

Every once in a while -- as rarely as once every 10,000 years -- a star will pass close to a supermassive black hole and its gravity tears the star apart. This process emits vast amounts of light and radiation that are visible from earth.

Astrophysicists from the DARK Cosmology Center at the Niels Bohr Institute at the University of Copenhagen have developed a computer model of the phenomenon that will allow the scientific community to investigate TDEs.

Dr. Jane Lixin Dai developed the model, which, for the first time, takes into account the difference in viewing angle from earth. This consideration allows scientists to categorize the varying observations correctly to study the black hole's properties, which otherwise would not be visible.

"It is interesting to see how materials get their way into the black hole under such extreme conditions," Dai said. "As the black hole is eating the stellar gas, a vast amount of radiation is emitted. The radiation is what we can observe, and using it we can understand the physics and calculate the black hole properties."

The same physics should happen in all TDEs, but the observed properties of the events have shown variation: some emit mostly X-ray emissions, others emit visible light and UV. Dai's model, which combines elements from general relativity, magnetic field, radiation and gas, provides a measure of what is expected to be seen when viewing TDEs from different angles.

The breakthrough has provided a new perspective to the fast-growing research field and will allow scientists to understand more about black holes, according to Enrico Ramirez-Ruiz, a co-author on the study.

"Only in the last decade or so have we been able to distinguish TDEs from other galactic phenomena, and the model by Dr. Dai will provide us with the basic framework for understanding these rare events," he said.