Scientists at ETH Zurich say the lessons learned from the folding and unfolding of the insects wings could improve the design of satellites, space probes, electronics and more. 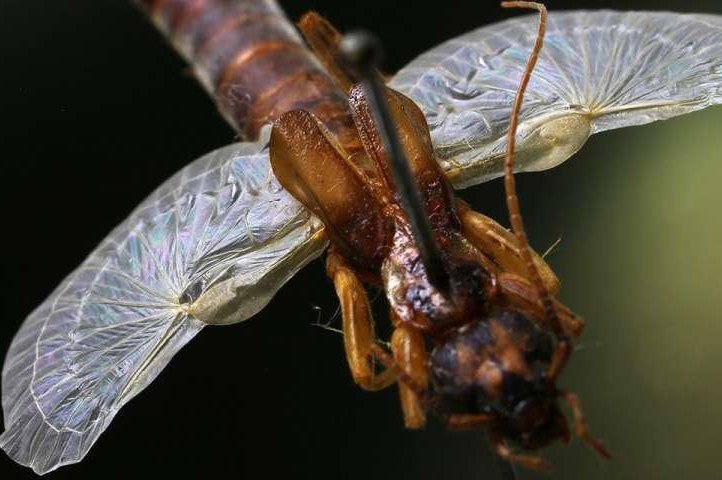 The wing of an earwig utilizes the design principles of origami. Photo by Jakob Faber/ETH Zurich

Researchers at ETH Zurich say the wing of an earwig is the perfect example of origami's design principles.

When folded, the earwig's wing fits snuggly and compactly against its body, allowing it to tunnel into the soil. When it emerges from dirt, the wing expands, increasing its surface area by a factor of ten and allowing the insect to take flight.

What's more, the wing is so structurally sound that it doesn't require muscle activation for stability. It also folds into itself with a simple click -- a model of efficiency.

To better understand the wing's genius, scientists at ETH Zurich set out to recreate it. While traditional origami is limited to rigid, straight folds, the earwig's wing uses elastic folds.

The elastic folds provide either an extensional or rotational spring. Each fold's function is determined by the thickness of the wing's material, a unique biopolymer. Some joints combine extensional and rotational functions.

Scientists used a 3D printer to produce a simplified wing model. The first iteration of the 3D-printed wing featured four stiff plastic plates connected by elastic folds. Researchers then scaled up their model to more closely replicate the complexity of the earwig's wing.

Like the wing of the earwig, the new foldable 3D-printed wing is stable when open and folds into itself with a simple touch. The team of scientists described their experimentation and their wing prototype in a paper published this week in the journal Science.

Researchers believe the same design principles could be used to design foldable electronics, or to improve the functionality of tents and foldable maps.

"Once you've unfolded these things, it's often impossible to fold them back to their original shape," lead researcher Jakob Faber said in a news release. "If, on the other hand, they simply refolded automatically, this would save a lot of hassle."

Science News // 5 hours ago
Study: Polluted air keeps butterflies, bees from pollinating
As air pollution worsens, fruits, flowers and the creatures that pollinate them could pay a price.

Science News // 22 hours ago
Dust storm grounded Mars helicopter, but it's ready to fly again
ORLANDO, Fla., Jan. 20 (UPI) -- One of the Red Planet's famous dust storms has kept the Mars helicopter Ingenuity grounded for two weeks, but the aircraft is scheduled for its 19th flight as early as Sunday, according to NASA.