"In one case we found all but one of 59 observed lakes drained in a single cascading event. Most of the melt lakes drain in this dynamic way," Poul Christoffersen, a researcher at the University of Cambridge. 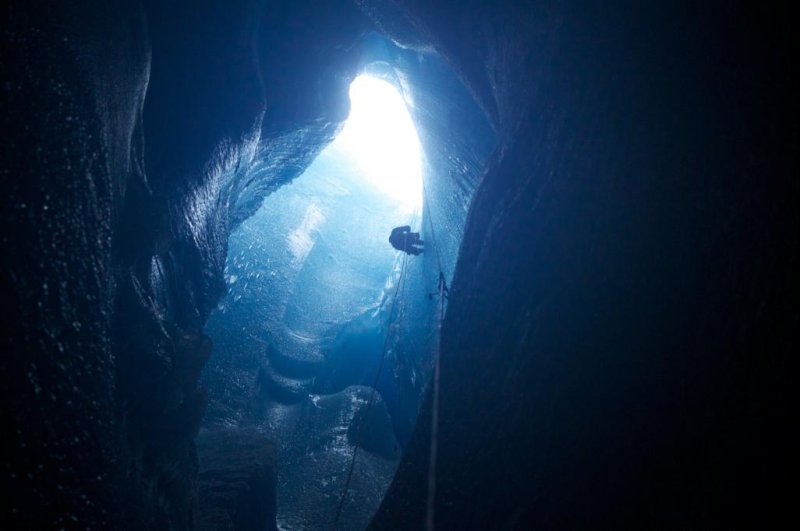 March 14 (UPI) -- Scientists have discovered a new threat to the stability of the Greenland ice sheet, a network of lakes whose chain reaction-like drainage patterns speed up the flow of the ice sheet.

In the summer, dozens of lakes form atop the Greenland ice sheet, lasting for weeks or months but draining in a matter of days or less. When they drain, freshwater and heat is carried to the bottom of the ice sheet.

While studying the dynamics of meltwater lakes, scientists discovered a correlation. They found dozens of lakes often drain seemingly all at once. When they took a closer look at the phenomenon, they realized they were witnessing a chain reaction, a cascade effect.

"Transfer of water and heat from surface to the bed can escalate extremely rapidly due to a chain reaction," Poul Christoffersen, from the University of Cambridge's Scott Polar Research Institute, said in a news release. "In one case we found all but one of 59 observed lakes drained in a single cascading event. Most of the melt lakes drain in this dynamic way."

When a lake drains, the meltwater spreads out along the bottom of the ice sheet, speeding up flow. Increased flow encourages the formation of new cracks and fissures in the ice, encouraging and accelerating the drainage of nearby lakes -- the chain reaction.

Scientists used 3D models powered by real world observations to study the dynamics of these chain-reactions. Satellite images confirmed the increase in ice fissures during the drainage events.

"The transformation of forces within the ice sheet when lakes drain is sudden and dramatic," said Marion Bougamont, also from the Scott Polar Research Institute. "Lakes that drain in one area produce fractures that cause more lakes to drain somewhere elsewhere. It all adds up when you look at the pathways of water underneath the ice."

During another observed cascade event, scientists witnessed the drainage of 124 lakes in just five days. Researchers say the increase in the prevalence of such cascade events poses a serious threat to the stability of Greenland's ice sheet.

Scientists shared their analysis of drainage dynamics on Greenland's ice sheet in a paper published this week in the journal Nature Communications.

RELATED Scientists gain insights into the secretive lives of narwhals

Science News // 11 hours ago
Watch Live: NASA Artemis 1 rocket begins pre-launch rollout
Aug. 16 (UPI) -- NASA plans to roll out its Space Launch System rocket on Tuesday ahead of its premiere flight set for later this month. The uncrewed test flight is part of the plan to return man to the moon.