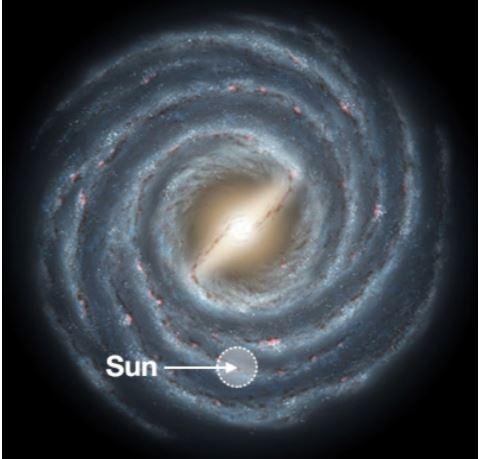 In this rendering by NASA, the sun's solar system is represented in relation to the Milky Way galaxy. The white circle displays the area where the majority of exoplanets have been found with telescopes, including Kepler. Illustration by T. Pyle/NASA/JPL-Caltech

Feb. 15 (UPI) -- Scientists have confirmed 95 additional exoplanets outside the solar system based on analysis of NASA's K2 mission data.

Since the first planet orbiting a star similar to the solar system's sun was detected in 1995, more than 3,300 exoplanets -- ranging from rocky Earth-sized planets to large gas giants like Jupiter -- have been found.

The first data from the K2 was released in 2014, with the latest findings released in a paper published in the Astronomical Journal.

"We started out analyzing 275 candidates of which 149 were validated as real exoplanets. In turn 95 of these planets have proved to be new discoveries," Andrew Mayo, a doctoral student at the National Space Institute at the Technical University of Denmark, said in a press release.

"Exoplanets are a very exciting field of space science," said Mayo, who started the research when he was a senior at Harvard College. "As more planets are discovered, astronomers will develop a much better picture of the nature of exoplanets which in turn will allow us to place our own solar system into a galactic context."

In 2009, NASA sent Kepler on the hunt for exoplanets in a specific part of the sky. A mechanical failure in 2013, however, caused the telescope to drift. Astronomers and engineers saved the space telescope by changing its field of view periodically, calling the second mission K2.

The scientists analyzed several hundred signals to determine which signals were created by exoplanets and which were caused by other sources.

"We found that some of the signals were caused by multiple star systems or noise from the spacecraft. But we also detected planets that range from sub Earth-sized to the size of Jupiter and larger," Mayo said.

One of the planets detected was orbiting a bright star.

"We validated a planet on a 10-day orbit around a star called HD 212657, which is now the brightest star found by either the Kepler or K2 missions to host a validated planet," Mayo said. "Planets around bright stars are important because astronomers can learn a lot about them from ground-based observatories."

Scientists hope to find more exoplants from upcoming space missions, including the James Webb Space Telescope and the Transiting Exoplanet Survey Satellite. That includes finding rocky Earth-sized planets that might be capable of supporting life.

Among the early discoveries from Kepler in 1995 was an Earth-sized planet dubbed Kepler 10b, located about 540 light years away.

Science News // 28 minutes ago
NASA's Artemis 1 rocket completes pre-launch rollout
Aug. 17 (UPI) -- NASA's Space Launch System rocket completed its rollout to the launch pad Wednesday at Kennedy Space Center in Florida, ahead of an uncrewed flight later this month and future plans to send humans back to the moon.

Science News // 1 hour ago
Moon, Mars to make celestial rendezvous in early-morning sky
Saturn has been a popular planet for stargazers this month as it reached its peak brightness on Sunday, but astronomy fans' attention will shift to another easy-to-spot planet on Friday: Mars.

Science News // 18 hours ago
Watch Live: NASA Artemis 1 rocket begins pre-launch rollout
Aug. 16 (UPI) -- NASA plans to roll out its Space Launch System rocket on Tuesday ahead of its premiere flight set for later this month. The uncrewed test flight is part of the plan to return man to the moon.