"When the snow on top of the ice gets warmer, the algae residing on the underside of the ice receive more light," researcher Lars Chresten Lund-Hansen said. 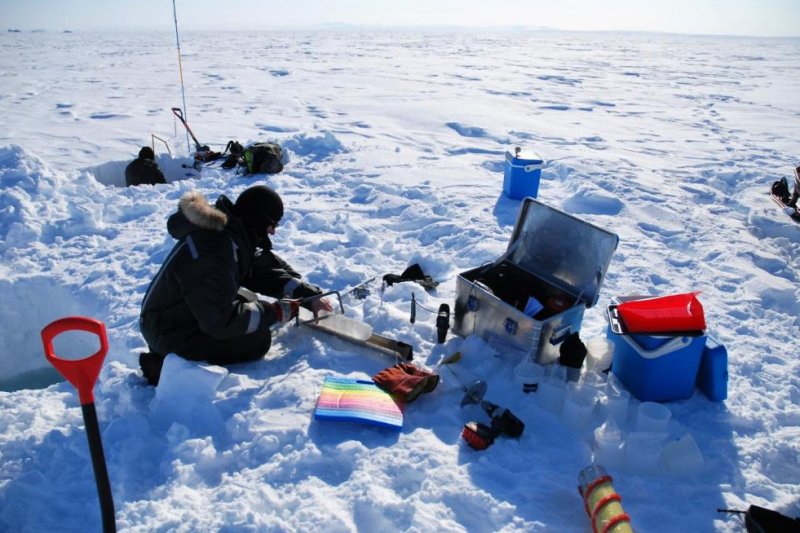 Feb. 6 (UPI) -- Scientists have found that sea algae growing on the underside of sea ice can bloom with only tiny amounts of light.

The findings, published this week in the Journal of Geophysical Research: Oceans, suggest algae begins blooming much earlier in the year than previously thought.

Scientists have long wondered how algae survives under the extreme conditions of the Arctic. The tiny organisms are found in high-salinity environments where temperatures are often below freezing and light is minimal.

"We worked on the sea ice in April-May, where there was a meter of sea ice and a meter of snow on top of the ice," Lars Chresten Lund-Hansen, a scientist with Aarhus University's Arctic Research Center in Denmark, said in a news release. "With special ice corers we drilled holes in the ice so that we could measure the ice algae on the underside of the ice and collect samples."

The algal diatoms, unicellular microorganisms, are found on the underside of sea ice and in the passages carved by sea water flows, called brine channels. Early in the season -- before the algal plankton become abundant -- the tiny diatoms are an essential food source for the Arctic ecosystems.

The latest research suggests these essential microorganisms are surprisingly early. The algae is able to grow at light levels measures just 0.02 percent of the light hitting the stop of the ice and snow on a sunny day.

It's the lowest threshold for active photosynthesis ever recorded.

Scientists found that even before the layers of snow atop sea ice begin to melt away, the snow warms and its optical conditions change, allowing fractionally more light to filter down to the underside of the sea ice -- enough to trigger algal growth.

"Temperatures are rising in the Arctic. When the snow on top of the ice gets warmer, the algae residing on the underside of the ice receive more light," Lund-Hansen said. "This may significantly impact the growth of the algae and the extent of the 'spring bloom.' This new knowledge must be considered in the puzzle of how the Arctic will respond to a warmer world."

Science News // 10 hours ago
NASA awards contract for 3D-printed construction on moon, Mars
Nov. 29 (UPI) -- Texas-based startup ICON has landed a five-year, $57 million contract from NASA to 3D-print landing pads, roads and shelter on the moon and on Mars.

Science News // 6 days ago
Study says the heaviest flying bird seems to self-medicate with plants
Nov. 23 (UPI) -- The great bustard actively seeks out medicinal plants that can kill pathogens, according to a study published Wednesday in Frontiers in Ecology and Evolution. The study suggests the large birds may be self-medicating.