"We are able to study them, unveil their presence and even have an idea of their masses," said researcher Eduardo Guerras. "This is very cool science."

The phenomenon known as microlensing can magnify all kinds of distant objects, including galaxies, nebulae, stars, planets and comets. Photo by University of Oklahoma

Feb. 5 (UPI) -- Astronomers have for the first time identified extragalactic exoplanets -- planets outside the Milky Way.

Using telescopes at NASA's Chandra X-ray Observatory and an observation technique called microlensing, scientists at the University of Oklahoma discovered a population of exoplanets inside a distant galaxy.

"We are very excited about this discovery. This is the first time anyone has discovered planets outside our galaxy," astronomer Xinyu Dai said in a news release. "These small planets are the best candidate for the signature we observed in this study using the microlensing technique. We analyzed the high frequency of the signature by modeling the data to determine the mass."

Microlensing is the magnifying effect caused by the gravitational influence of intermediary objects. As light from distant objects travels past an object on the way to Earth, the gravitational phenomena magnifies the faraway light.

Scientists were able to observe the magnified signatures of extragalactic exoplanets. Astronomers identified a planet as small as Earth's moon and as big as Jupiter.

"This is an example of how powerful the techniques of analysis of extragalactic microlensing can be," said postdoctoral researcher Eduardo Guerras.

Dai and Guerras published their discovery in the Astrophysical Journal Letters.

"This galaxy is located 3.8 billion light years away, and there is not the slightest chance of observing these planets directly, not even with the best telescope one can imagine in a science fiction scenario," said Guerras. "However, we are able to study them, unveil their presence and even have an idea of their masses. This is very cool science." 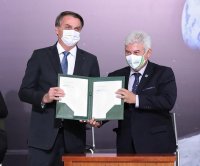 Science News // 9 hours ago
Brazil becomes first South American partner to NASA's Artemis Accords
June 16 (UPI) -- Brazil has become the 12th nation and the first from South America to sign onto NASA's agreement to create a safe, transparent and sustainable environment for the exploration of space.