"If we lose more and more ice in the future because of warming, higher proportions of carbon could be emitted as CH4," said researcher Clayton Elder. 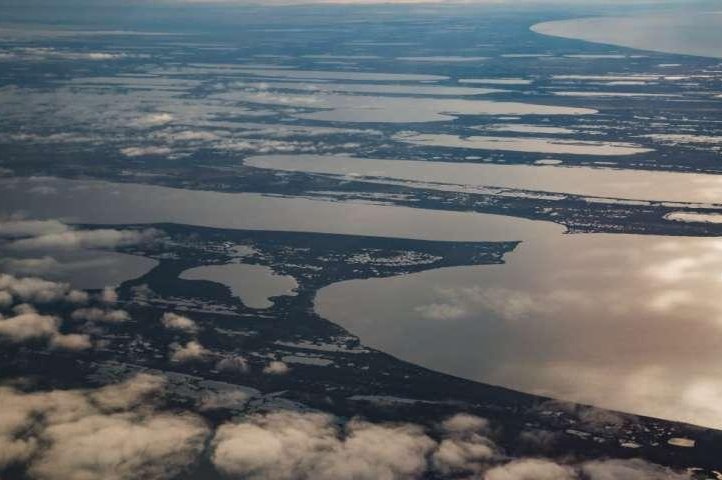 Feb. 1 (UPI) -- For now, the most ancient carbon remains locked up and frozen deep in the Arctic tundra. The latest investigation of the Arctic's carbon cycle suggests Arctic lakes are emitting relatively young carbon.

Scientists at the University of California, Irvine used carbon-14 dating methods to identify the age of carbon molecules escaping lakes in northern Alaska. Researchers sampled a diverse array of lakes -- during both summer and winter -- spread across Alaska's North Slope.

Their analysis -- detailed this week in the journal Nature Climate Change -- suggests the carbon being released was only recently deposited.

The research offered new insights into the relationship between geology and carbon storage patterns. Scientists found lakes surrounded by deposits of finer sediments were more efficient storers of carbon. Sandier deposits were less efficient. Conversely, the thawing of finer sediments can lead to a great increase in carbon emissions.

Researchers also determined that the majority of carbon emitted from Arctic lakes is in the form of carbon dioxide, or CO2, not methane, or CH4. Methane is less concentrated in Earth's atmosphere, but it's able to more efficiently trap heat.

"This implies that a large proportion of the CH4 produced in lake sediments is oxidized to CO2 in the water column before emission into the atmosphere," said Elder, who conducted the research while earning his PhD at UCI. "Ice cover, which is sensitive to climate, is particularly important for converting would-be CH4 emissions into the less impactful CO2, because it impedes emissions and makes CH4 vulnerable for longer periods to oxidizing microbes living in the water column. If we lose more and more ice in the future because of warming, higher proportions of carbon could be emitted as CH4."

Researchers characterized their study as a first-of-its-kind. They believe their work will serve as a baseline for future explorations of the carbon cycle of northern Alaska and the Arctic.

Science News // 21 hours ago
NASA moving massive SLS moon rocket out to launch pad ahead of schedule
Aug. 15 (UPI) -- NASA announced Monday that it will roll out its Artemis I Moon rocket on Tuesday evening, which is two days earlier than originally planned.

Science News // 5 days ago
New study of moon rocks finds they contain gases from Earth
Aug. 11 (UPI) -- A new study of six moon rocks has discovered proof that the moon includes chemical elements from Earth's interior -- a finding that supports the theory that the moon was created when something smashed into Earth.
Advertisement