Researchers say the newly found star is "almost identical to the Sun, except for the chemical composition."

An image shows sunspots on the surface of HD 173701, a sun-like star found 120 light-years from Earth. Photo by NASA/SDO

Jan. 5 (UPI) -- Scientists at Denmark's Aarhus University believe a newly discovered star can help them better understand the sun's variability and its impact on Earth's climate.

Activity on the surface of the sun, including the prevalence of sun spots and solar flares, follows short- and long-term patterns. Scientists have identified an 11-year pattern of sun spot activity called the solar cycle, but researchers' understanding of the cycle remains incomplete.

Unexplained anomalies continue to confound scientists, like a 50-year period of zero sun spot activity during the 17th century -- a period known as the Maunder Minimum.

But a newly discovered star promises to offer new insights to the nature of the Sun's unique cycles. The star is like a replica of the sun, with an identical mass, radius and age. Chemical composition accounts for the primary differences between the two.

The star, HD 173701, found 120 light-years away in the constellation Cygnus, hosts a higher concentration of heavy elements -- heavier than hydrogen and helium -- than the sun.

Like the sun, the star also hosts sunspots. Scientists were able locate observations of the star dating back to 1978 among archival data collected by NASA's Kepler spacecraft. Their analysis of the data revealed the presence of a 7.4-year cycle of solar spot activity.

"The unique combination of a star almost identical to the Sun, except for the chemical composition, with a cycle that has been observed from both the Kepler spacecraft and from ground makes this star a Rosetta Stone for the study of stellar dynamos," researcher Christoffer Karoff said in a news release.

Scientists used a variety of measurements to develop the most detailed portrait yet of a stellar cycle outside of the Sun. The observations showed the cycle feature electromagnetic fluctuations twice as strong as those found on the surface of the Sun. Data showed the cycle also features especially strong patterned changes in visible light.

Researchers believe the higher concentrations of heavy elements alters the convection-like flows of energy through the dense, inner regions of the star, which in turn, strengthen the solar cycle.

They published their analysis this week in the Astrophysical Journal.

RELATED Earth passes perihelion, its closest point to the sun

Some scientists believe the 17th century's Maunder Minimum explains the Little Ice Age, a period from 1650 to 1850 that featured three decades-long dips in global temperatures. But scientists disagree on the extent to which solar cycles influence Earth's climate.

Karoff and his colleagues hope their new "Rosetta Stone" star can help scientists build more accurate solar cycle models and offer some clarify on the debate.

Advertisement
RELATED Space 2018: Missions and launches to look for in the new year

Science News // 18 hours ago
Dragon, U.S space freighter, successfully splashes down in Fl, ending the trip
Jan. 24 (UPI) -- A SpaceX Dragon capsule that had transported supplies and experiments to the International Space Station splashed down along the coast of Florida on Monday afternoon.

Science News // 23 hours ago
Hippos can recognize familiar voices, new study finds
Jan. 24 (UPI) -- Hippopotamuses can tell the difference between strangers and their neighbors based only on the sound of their voices, according to a study published Monday in Current Biology. 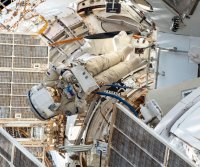