"As the climate warms, the area that the algae can grow in will expand, so they'll colonize more of the ice sheet," researcher Marek Stibal said. 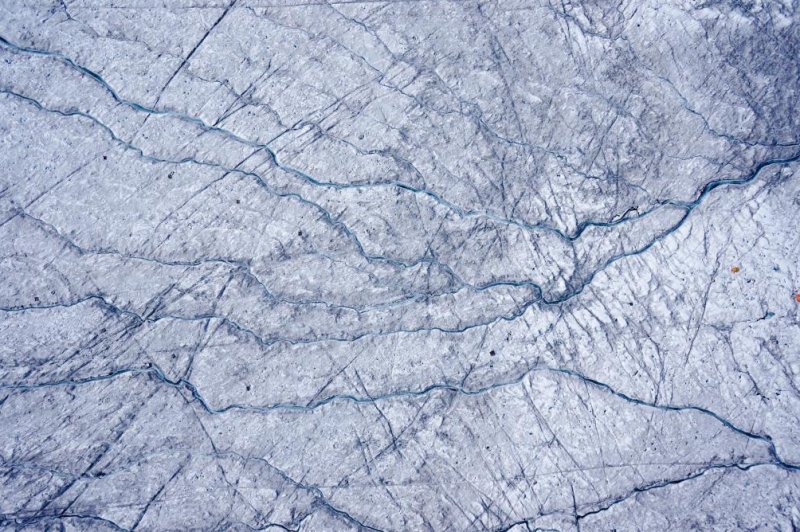 An aerial photo shows the region of Greenland's ice sheet where researchers measure the impacts of algal growth on the surface's reflectivity. Photo by Jason Box/Jonathan Ryan

Dec. 21 (UPI) -- The growth of algae is accelerating the melting of Greenland's ice sheet, according to new research.

Previous studies have focused on the role dust and black carbon play in encouraging melting, but the latest study -- published this week in the journal Geophysical Research Letters -- suggests algae is a greater threat to Greenland's ice.

Like dust and soot, algae reduces the reflectivity of ice, causing the ice to absorb more of the sun's energy. The extra thermal energy promotes melting.

As part of the new study, scientists quantified algae's effects on the ice sheet's reflectivity, or albedo.

For several weeks in the summer of 2014, researchers observed algae growth on Greenland's ice sheet. Scientists collected ice samples and counted the number of cells growing on each. They used the data to determine the relationship between algae and reflectivity.

The numbers showed algae darkens the ice's surface more than dust or black carbon. Algae growth is responsible for between 5 and 10 percent of the ice melted each summer, scientists calculated.

Scientists worry a warming planet could encourage the growth of algae, further accelerating the loss of Greenland's ice sheet.

RELATED Sea levels will rise, but scientists not sure how high

"The novel aspect of our study is that we discover biological processes play an important role in ice sheet behavior," Marek Stibal, a cryosphere ecologist at Charles University in Prague, Czech Republic, said in a news release. "Glaciologists usually only look at inorganic materials when studying light reflectance and ice melt because biological processes are often too complicated to capture. But we find organisms can have a large-scale effect on a system that was previously studied in an abiotic context."

While researchers didn't specifically estimate how much melting algae could cause in the decades ahead, their calculations could help scientists design more accurate ice sheet melting forecast models in the future.

"As the climate warms, the area that the algae can grow in will expand, so they'll colonize more of the ice sheet," Stibal said. "Additionally, the growing season will lengthen, so the contribution of algae to melting of the ice will probably increase over time."

The latest work is one of a number of studies looking at the relationship between climate systems and local ecosystems. One study found that as algae growth on Greenland encourages melting, growing influxes of freshwater could reduce the growth of marine phytoplankton in fjords, altering current patterns and disrupting food chains.

"The major implication of their findings is that the ice sheet is not a simple abiotic system of snow and ice, but rather an ecosystem," said Nozomu Takeuchi, professor of earth sciences at Chiba University in Japan. "Understanding this biological process more quantitatively could induce a new perspective on other climate cycles of the Earth, such as glacial-interglacial cycles."