New graphene robot moves in response to changes in humidity

"These robots are simple and can be flexibly manipulated by changing the environmental humidity," said researcher Yong-Lai Zhang. 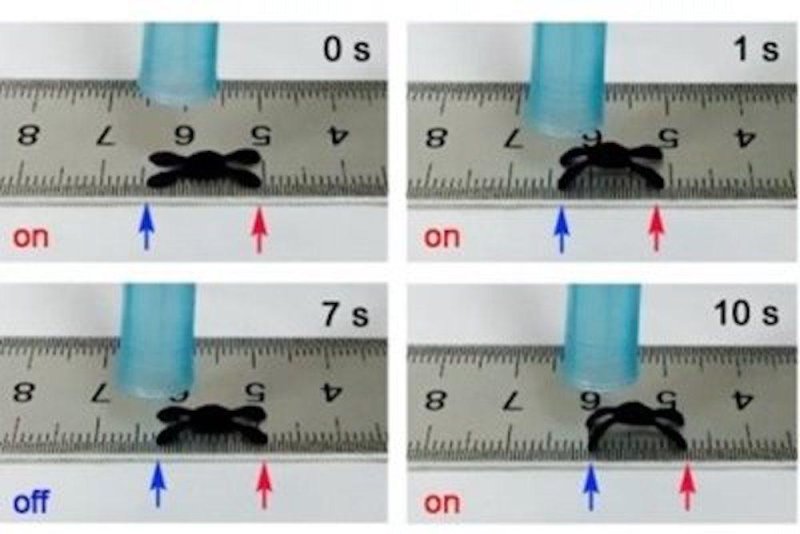 The graphene spider robot bends and flattens in response to changes in humidity, creating a crawling motion. Photo by Yong-Lai Zhang/Jilin University

June 26 (UPI) -- Scientists in China have designed a graphene robot that moves in response to changes in humidity.

By exposing a sheet of graphene oxide to a brief, bright flash of light from a camera flash, researchers created a material that is sensitive to moisture. Testing showed the graphene oxide sheet bends in response to relative humidity changes.

Scientists used the novel material to create a spider-like robot capable of crawling in response to humidity changes.

"The development of smart materials such as moisture-responsive graphene oxide is of great importance to automation and robotics," lead researcher Yong-Lai Zhang, a material scientist at Jilin University in China, said in a news release. "Our very simple method for making typical graphene oxides smart is also extremely efficient. A sheet can be prepared within one second."

Scientists have created other types of materials that respond to moisture, but graphene offers added advantages -- including strength, conductivity, flexibility, biocompatibility and more.

The camera flash works by inducing reduction, stripping oxygen molecules from the graphene. Only the exposed side of the graphene is reduced, which causes it to absorb fewer water molecules. The other side absorbs more water molecules and bends toward the reduced side when exposed to higher humidity levels. Drier air flattens the sheet.

The kinetic action can be manipulated by changes in humidity to create a crawling pattern, allowing the robot to autonomously propel itself. Researchers were also able to create a claw-shaped graphene robot capable of opening and closing its grasp without an outside power source.

Researchers detailed their work in a new paper, published this week in the journal Optical Materials Express.

"These robots are simple and can be flexibly manipulated by changing the environmental humidity," said Zhang. "These designs are very important because moving and capturing/releasing are basic functions of automated systems."

Science News // 2 hours ago
Study: Coral reefs' protection saves U.S. property owners billions each year
April 15 (UPI) -- If the reefs lining the coasts of the United States were just 3 feet shorter, damage from floods would be $5.3 billion greater, according to a new research.

Science News // 5 hours ago
Billions of T. rexes walked on North America during the Age of the Dinosaurs
April 15 (UPI) -- Researchers determined North America's T. rex population peaked at 20,000. That means that over the course of their 2.5 million-year reign atop the Cretaceous food chain, 2.5 billion lived and died on the continent.