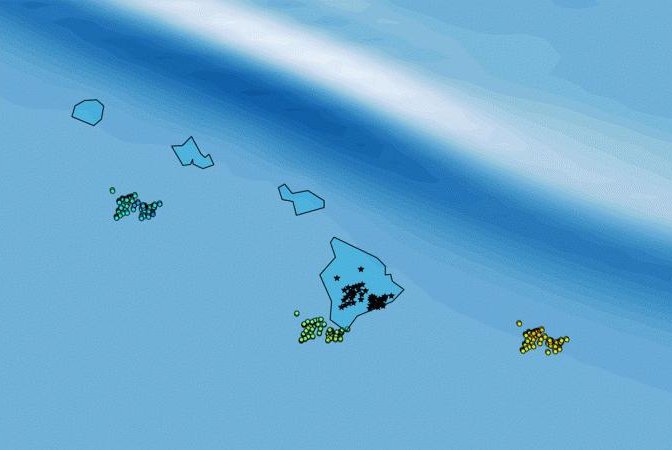 Researchers were able to detect the 2012 Queen Charlotte Island tsunami by analyzing changes in electron densities in the ionosphere. The changes -- caused by internal gravity waves propagated by the massive wave -- were detected by GPS signals. Photo by Sapienza University/NASA-JPL/Caltech

May 18 (UPI) -- Can satellites spot the beginnings of a tsunami from several thousand miles above Earth's surface? A team of researchers from Italy and the United States believe so.

As tsunamis form, the crests and troughs of the waves compress the air above sending internal gravity waves into the atmosphere. These waves become amplified as they travel across thinner air at higher elements. When they reach an attitude between 186 and 217 miles, they begin altering electron densities in the ionosphere. GPS signals can detect these changes as they pass through Earth's upper atmosphere.

Giorgio Savastano, a graduate student in geodesy and geomatics at Sapienza, designed the algorithm for VARION, short for Variometric Approach for Real-time Ionosphere Observation, while working as a research fellow at JPL.

"VARION is a novel contribution to future integrated operational tsunami early warning systems," Savastano said in a news release. "We are currently incorporating the algorithm into JPL's Global Differential GPS System, which will provide real-time access to data from about 230 GNSS stations around the world that collect data from multiple satellite constellations, including GPS, Galileo, GLONASS and BeiDou."

Researchers say the VARION detection system could be linked with other types of monitoring devices, including seismometers or ocean buoys. When a seismic disturbance is detected, the system can be triggered to start analyzing real-time electron density changes the atmosphere above the earthquake's epicenter.

"We expect to show it is feasible to use ionospheric measurements to detect tsunamis before they impact populated areas," said NASA scientist Attila Komjathy. "This approach will add additional information to existing systems, complementing other approaches. Other hazards may also be targeted using real-time ionospheric observations, including volcanic eruptions or meteorites."

NASA has plans to improve their ionosphere observational abilities with two new satellite missions, Ionospheric Connection Explorer and the Global-scale Observations of the Limb and Disk, set to launch in early 2018.

Science News // 1 hour ago
Space dust study could explain how water originated on Earth
Nov. 29 (UPI) -- A new analysis of space dust shows that the water covering the majority of Earth's surface could have formed in space with help from solar wind.

Science News // 9 hours ago
Astronaut spacewalk to replace faulty space station antenna
Nov. 29 (UPI) -- A pair of NASA astronauts -- a veteran and a first-time space flyer -- are to venture outside the International Space Station on Tuesday to replace a broken antenna that helps the crew in space communicate with Earth.