Migrating fish leave behind a trail of DNA

"It could easily improve the rationality with which fish quotas are set, and the quality and reliability of their monitoring around the world," scientist Jesse Ausubel said of the new analysis method. 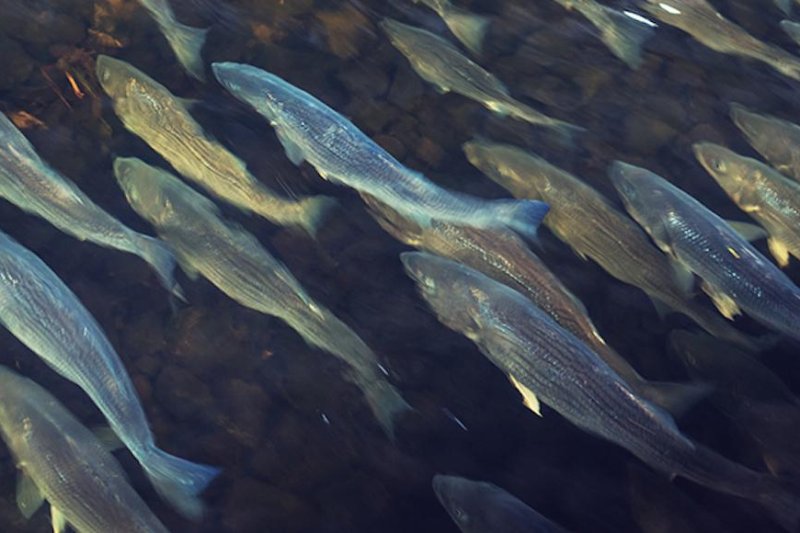 April 14 (UPI) -- Wherever fish go, they leave behind traces of DNA. As new research shows, scientists can track fish migrations by following their trail of DNA.

Researchers at Rockefeller University sequenced DNA from water samples collected daily in New York's East and Hudson Rivers. Their analysis -- detailed in the journal PLOS ONE -- revealed the presence and absence of a variety of local fish species as they traversed the river.

The presence and absence of specific species corresponded with migration patterns established by previous net surveys.

Researchers identified the genetic signatures of 42 fish species among the sampled DNA. The amount of genetic material corresponded to the expected abundance of local species. Only a few surprise species were identified.

"We didn't find anything shocking about the fish migration -- the seasonal movements and the species we found are known already," said Stoeckle.

That means the technique is accurate. Because the method is cheap and easy, researchers believe it has great potential. However, scientists say more testing and comparisons with previous surveys are necessary.

"If future research confirms that an index of species' abundance can be derived from naked DNA extracted from water, it could easily improve the rationality with which fish quotas are set, and the quality and reliability of their monitoring around the world," said Jesse Ausubel, director of Rockefeller's Program for the Human Environment.

Science News // 14 hours ago
Rise in air pollution correlates to creation of impressionist painting, study says
Feb. 4 (UPI) -- Smoggy air during the Industrial Revolution contributed to the creation of impressionism, inspiring painters such as J.M.W. Turner and Claude Monet to develop new painting styles, according to a new study.

Science News // 1 day ago
Early COVID-19 variants remain in deer populations
While COVID-19 variants Alpha, Gamma and Delta are no longer circulating among humans, they continue to spread in white-tailed deer.

Science News // 2 days ago
NASA names first person of Hispanic heritage as chief astronaut
Feb. 2 (UPI) -- Veteran astronaut Joe Acaba made history on Thursday when he was named chief of the Astronaut Office at NASA's Johnson Space Center in Houston.

Science News // 2 days ago
Astronauts use spacewalk to continue upgrade of ISS solar arrays
Feb. 2 (UPI) -- Astronauts from NASA and Japan Aerospace Exploration Agency stepped out from the International Station to begin a spacewalk early Thursday to complete work started by another work team almost two weeks ago.

Science News // 4 days ago
Study suggests dolphins in Brazil are training humans to fish
Jan. 31 (UPI) -- Bottlenose dolphins that have herded mullet for fishermen in southeastern Brazil for more than a century are now helping scientists unlock the deeper mystery behind the collaboration between animals and humans.

Science News // 4 days ago
Comet, full moons, Mars: February brings must-see astronomy
February's fickle weather can pose a challenge to stargazers. But when the night sky is devoid of clouds, it will offer the opportunity to witness several eye-grabbing astronomical events.

Science News // 5 days ago
Parasites, pesticides, climate change linked to loss of honey bee colonies
Jan. 30 (UPI) -- About 43% of honey bee colonies were lost in the span of one year, according to a new study that considered multiple factors that put a crucial part of the ecosystem at risk.