The rusty patched bumble bee is the first bumble bee species in the continental United States to be granted endangered species protections. Photo by Christy Stewart/FWS

March 22 (UPI) -- The endangered status for the rusty patched bumble bee is now official. Protections for the endangered species took effect on March 21.

Once common in 28 states, the District of Columbia and two Canadian provinces, the abundance of the rusty patched bumble bee has declined 87 percent. Its range now includes just 9 states and one province.

"The rusty patched bumble bee is among a group of pollinators -- including the monarch butterfly -- experiencing serious declines across the country," Tom Melius, midwest regional director for the Fish and Wildlife Service, said in a news release.

The rule granting the species its endangered status was originally published in the Federal Register on January 11, 2017, and the rule was scheduled to become formal on February 10, but the Trump administration delayed all not-yet-finalized rules passed under former President Barack Obama for at least 60 days.

At the time, the White House said the delay would allow officials to review "questions of fact, law, and policy" related to pending regulations.

Though the delay inspired concern among conservationists, officials with the Fish and Wildlife Service said their conservation plans continued unabated.

"The change in the effective date from February 10 to March 21, 2017, is not expected to have an impact on the conservation of the species," Gary Frazer, the agency's assistant director of ecological services, said last month.

RELATED Study: Suburban bees prefer to forage on farms, not in the city

In the end, the delay came and went without further interference from the White House. The rusty patch bumble bee is now officially the first bumble bee species in the continental U.S. to be protected by the Endangered Species Act.

Science News // 46 minutes ago
Researchers develop 'robo-cane' that may improve navigation for the blind
The "white cane" that many blind people rely on for navigating the world hasn't been upgraded in a century, but researchers are reporting progress on a "robo-cane" they hope will modernize the assistive device.

Science News // 19 hours ago
Humans used tools to make clothes more than 100,000 thousand years ago
Sept. 16 (UPI) -- Humans living on the Atlantic coast of what's now Morocco were making clothes from animal hides between 120,000 and 90,000 years ago, according to a new study.

Science News // 23 hours ago
Inspiration4 crew circles the Earth on mission's first full day
ORLANDO, Fla., Sept. 16 (UPI) -- The crew of the first all-private orbital space mission has spent Thursday, the first full day of the mission, circling the Earth every 90 minutes at over 17,000 mph.

Science News // 23 hours ago
New Zealand schoolchildren discover new species of giant penguin
Sept. 16 (UPI) -- In 2006, a group of schoolchildren on a fossil-hunting field trip in New Zealand unearthed the bones of a giant penguin. Now, 15 years later, that flightless bird is getting a name, Kairuku waewaeroa. 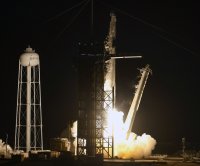 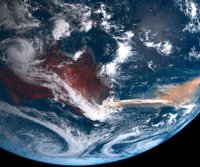 Science News // 1 day ago
Australian wildfires triggered giant algal blooms thousands of miles away
Sept. 15 (UPI) -- The bush fires that torched Australia in 2019 and 2020 fueled massive algal blooms a few thousand miles away in the Southern Ocean, according to a new study.
Advertisement