Researchers at Northwestern University and Claremont McKenna, Scripps and Pitzer conducted a study that suggests power of the eyes and not the limbs prompted our ancient aquatic ancestors to leap from water to land. They produced an animated video to explain the research. Image from YouTube/Northwesternn

March 9 (UPI) -- Larger animals' eyes prompted them to develop limbs to venture from water onto land for the first time more than 385 million years ago, according to a new study.

Researchers studied fossil records and determined that crocodile-like animals discovered meals they would want on land and evolved limbs to accomplish the task.

The study was conducted by researchers at Northwestern University in Evanston, Ill., and Claremont McKenna Scripps and Pitzer colleges in California on 59 specimens spanning before the transitions, during the change and afterward.

"Why did we come up onto land 385 million years ago? We are the first to think that vision might have something to do with it," said Malcolm A. MacIver, professor of biomedical engineering and mechanical engineering at Northwestern's McCormick School of Engineering.

"We found a huge increase in visual capability in vertebrates just before the transition from water to land. Our hypothesis is that maybe it was seeing an unexploited cornucopia of food on land -- millipedes, centipedes, spiders and more -- that drove evolution to come up with limbs from fins," MacIver said.

Fish could see 70 times farther in air than water. And with the eyes three times as big, the range is increased a millionfold, the researchers said.

"Bigger eyes are almost worthless in water because vision is largely limited to what's directly in front of the animal," said Lars Schmitz, assistant professor of biology at the W.M. Keck Science Department, a joint program of Claremont McKenna, Scripps and Pitzer colleges.

They conducted computer simulations of the animals' visual environments, including clear or murky water in the daytime or above water during the day and night. It revealed the benefit of increased eye size would occur when an animal is seeing through air and not water.

They studied the size of fossils' eye sockets and head lengths. They found before the transition the size was 13 millimeters but it grew to around 36 millimeters.

"The tripling of orbit size took 12 million years," MacIver said. "This is the timescale of evolution, which boggles our mind."

During tripling, eyes shifted from the side of the head to the top. The researchers believe brains expanded with the bigger eyes' development. This allowed them to plan and not just react.

"Massive Increase in Visual Range Preceded the Origin of Terrestrial Vertebrates" was published Tuesday by the journal Proceedings of the National Academy of Sciences. It was partially funded by the National Science Foundation.

Science News // 4 hours ago
Geologists figure out what fuels 'slowquakes'
Jan. 24 (UPI) -- Researchers have identified the origins of slow earthquakes, or slowquakes, a unique type of earthquake discovered just 20 years ago. 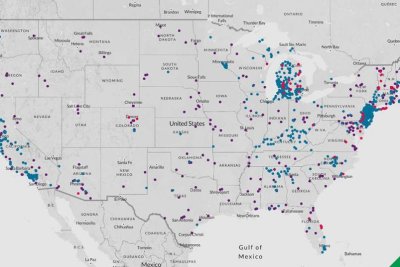