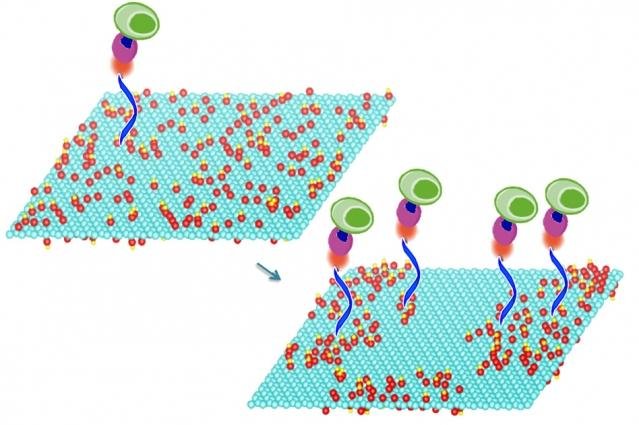 Mildly heating graphene made the carbon sheet easily bind with compounds designed to attract and capture biological targets like cells, DNA or proteins. Photo by MIT

A new cell analysis method developed by scientists at the Massachusetts Institute of Technology could allow simple sheets of graphene oxide to function as a diagnostics device for medical and biological tests.

Tests show that when the oxidized sheets of hexagonally arranged carbon atoms are heated at moderate temperatures, they easily bond with a class of compounds designed to capture DNA, proteins and whole cells.

The latest development, detailed in the journal ACS Nano, is cost-effective and easily scalable.

The heating process works by triggering the congregation of oxygen atoms, leaving gaps in the graphene where other compounds can quickly and easily bind to the surface.

MIT scientists designed a proof-of-concept test to show how graphene could be used as a diagnostic tool. Researchers then married graphene with compounds designed to attract immune cells that serve as markers for certain cancers.

When introduced to a blood sample, the oxidized graphene was more efficient at capturing the immune cells than untreated graphene sheets.

"Efficiency is especially important if you're trying to detect a rare event," biological engineer Angela Belcher told MIT News. "The goal of this was to show a high efficiency of capture."

Belcher says the next step is to design a graphene detector for a specific disease.