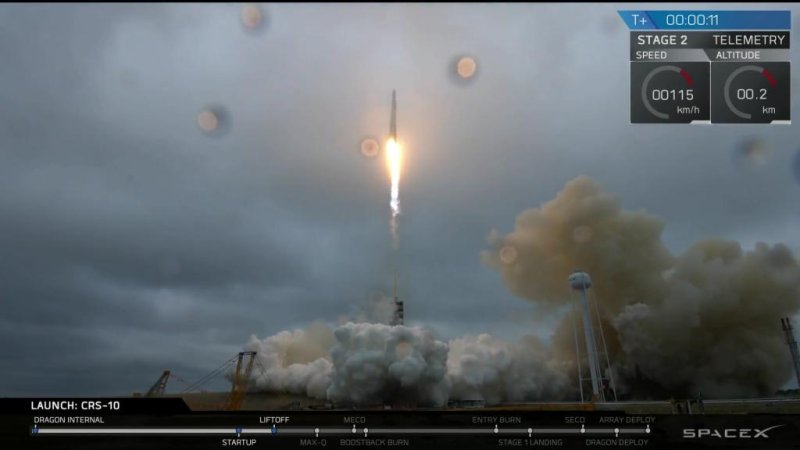 SpaceX on Sunday successfully launched and landed its Falcon 9 rocket a day after aborting the mission seconds before launch. The Falcon 9 was carrying the Dragon spacecraft, which will deliver supplies and critical cargo to the International Space Station. Photo courtesy of SpaceX

Feb. 19 (UPI) -- SpaceX on Sunday successfully launched and landed its Falcon 9 rocket a day after aborting the mission seconds before launch.

SpaceX aborted the launch on Saturday at the T-minus 10 second mark before liftoff due to a second stage thrust vector control issue.

"SpaceX's Falcon 9 rocket will launch the Dragon spacecraft to low-Earth orbit to deliver critical cargo to the International Space Station for NASA," SpaceX said in a statement prior to launch. "Dragon will separate from Falcon 9's second stage about 10 minutes after liftoff and attach to the station roughly two days later."

"Dragon will be filled with more than 5,000 pounds of supplies and payloads, including critical materials to directly support dozens of the more than 250 science and research investigations," SpaceX said. "Among the investigations are experiments with potential to help fight human disease, monitor climate data, and improve autonomous spacecraft docking with the orbiting laboratory."

RELATED NASA: Red dwarf habitable zones may not be so habitable

Donald Trump may accelerate NASA's return to the moon

Science News // 1 hour ago
Telescope test captures 'deepest images of the universe ever taken'
NASA's James Webb Space Telescope is peering into the depths of the universe with its one-of-a-kind instruments, and NASA has unveiled a new image captured by the telescope.

Science News // 6 days ago
Milky Way to set backdrop for summertime comet, meteor showers
July offers a slate of astronomical sights for young stargazers, those experienced with a telescope and everyone in between.

Telescope test captures 'deepest images of the universe ever taken'