"Phyllis, turned out to be an amazing seal," researcher Dan Costa said. 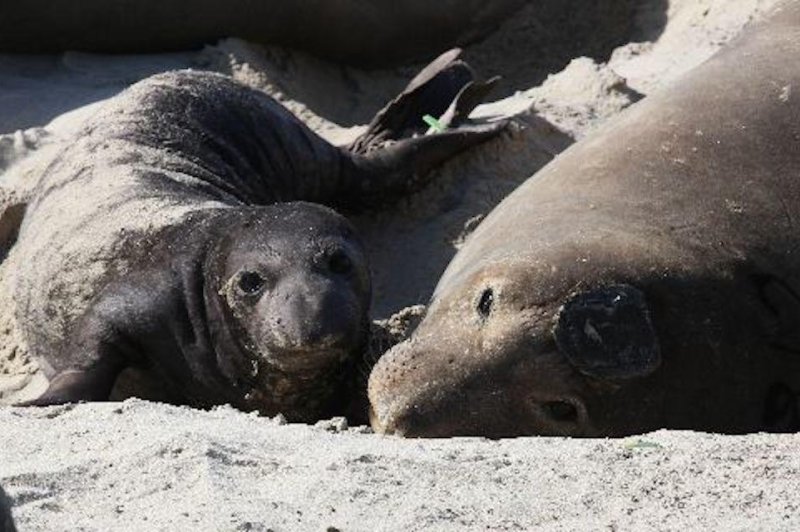 Phyllis lounges in the sand with her newborn pup. Photo by UC-Santa Cruz

Phyllis logged more than 7,400 miles on her journey past the International Date Line and back. Photo by UC-Santa Cruz

Feb. 9 (UPI) -- Scientists at the Dan Costa Lab at the University of California, Santa Cruz, had grown attached to Phyllis, the eight-year-old elephant seal. So when her satellite tag fell silent on New Year's Eve, researchers were dismayed.

But while scientists worried back on land, Phyllis wasn't being eaten or dying, she was busy setting a new swim record. Two weeks after her tag stopped transmitting, scientists spotted Phyllis on the rocks of a cove at Ano Nuevo State Park in San Mateo County.

Phyllis had swum roughly 7,400 miles -- 3,400 more miles more than the average elephant seal foraging trek. It's the most miles any elephant seal has logged since researchers at the lab began tracking the sea mammals.

Before turning around, Phyllis passed the International Date Line and almost reached Japan. Five days after her return to the shores of California, Phyllis gave birth to a healthy, male pup.

"Phyllis, turned out to be an amazing seal," Dan Costa, a professor of ecology and evolutionary biology, said in a news release.

Now, Costa and his colleagues are trying to figure out what exactly inspired Phyllis to swim so far. Three other females, Claudia, Mary, and Sheila, also swarm much farther than usual, passing the International Date Line.

Researchers are now analyzing ocean temperature, salinity, and depth measurements logged by the seals' tracking devices with the hope of determining whether their extra-long journeys were anomalies or inspired by climate change.

Musk, Maezawa say moon mission is on track for 2023