"The future of ingestible devices could look dramatically different from what we have today," said researcher C. Giovanni Traverso. 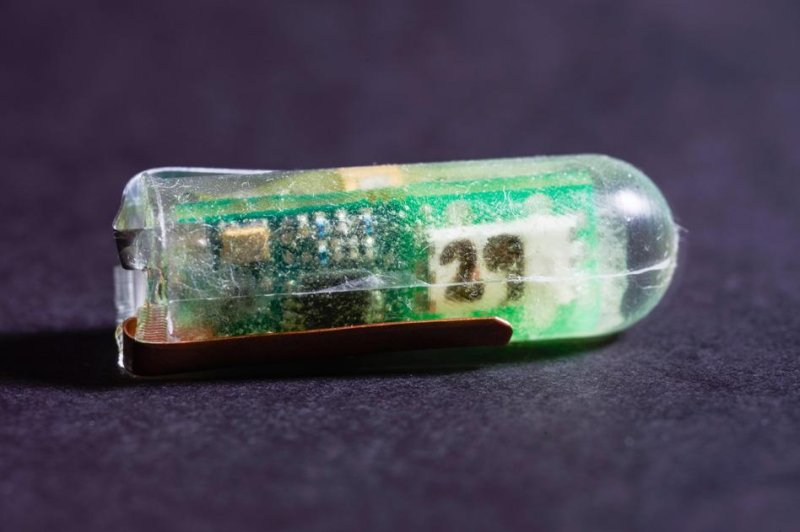 Researchers in Boston designed an ingestible device that can derive power from stomach acid for up to a week. Photo by Diemut Strebe/MIT

Researchers in Boston designed an ingestible device that can derive power from stomach acid for up to a week. Photo by Nadeau et al./Nature Biomedical Engineering

Feb. 6 (UPI) -- Scientists have developed a new class of ingestible devices that derive power from stomach acid. The devices can operate for up to a week inside the digestive system.

The electronic capsule prototypes were developed by a team of researchers from Brigham and Women's Hospital, in Boston, and the Massachusetts Institute of Technology. The capsules can measure temperature and other biological properties and stream the data wirelessly to a remote receiver.

"Our data is one of the first demonstrating an ingestible device that derives long-term power solely from the stomach and the small intestine," C. Giovanni Traverso, a gastroenterologist and biomedical engineer at BWH, said in a news release. "Our work helps pave the way toward a new era of pill-sized electronics, which can operate over the course of weeks or even months in the gastrointestinal tract -- changing the way we think about disease diagnosis, monitoring, and treatment."

Gastroenterologists regularly use pill-sized cameras to examine the small intestines of patients. The cameras remain in the intestines for a day or so.

Researchers have developed devices capable of remaining in the intestinal track for several days, but the devices require longer battery life. Inspiration from the "lemon battery" helped scientists solve the problem.

Like the lemon battery -- a popular high school science project -- the new devices use acid to encourage an electric flow between two electrodes. Experiments showed low-cost zinc and copper electrodes could derive power from gastric acid for a week.

In large animal models, researchers showed their prototype could record and send temperature measurements every 12 seconds for six straight days.

The researchers detailed their feat in the journal Nature Biomedical Engineering.

Researchers are now working on making their prototype more efficient and parlaying their technology into other types of ingestible devices.

"Because of the GI tract's unique position in the body -- adjacent to the heart, lungs, and liver -- there is a growing interest in devices that can also monitor and potentially treat a variety of organ systems and conditions," Traverso said. "The future of ingestible devices could look dramatically different from what we have today."