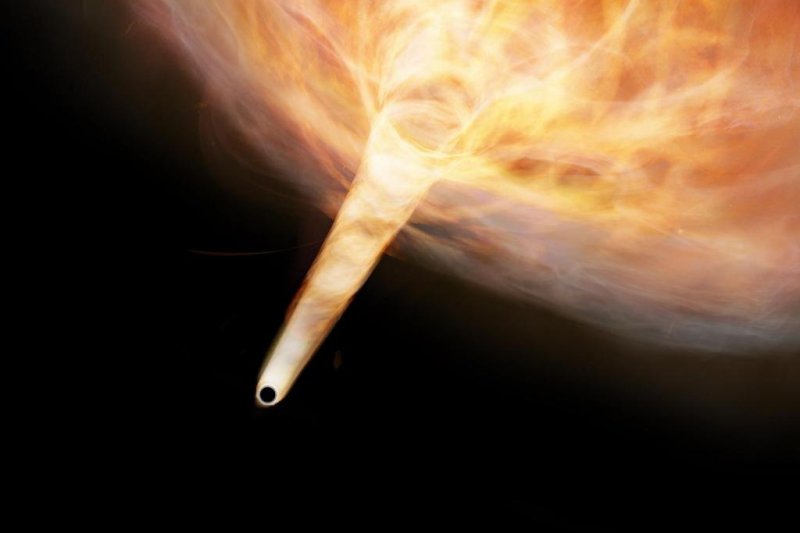 Feb. 2 (UPI) -- Astronomers have happened upon a solitary black hole wandering quietly through the Milky Way.

Not all black holes generate an accretion disk big or strong enough to emit visible radiation. Without detectible emissions, the mysterious orbs of dark energy are nearly impossible to find. But sometimes, scientists get lucky.

Researchers didn't set out to find a black hole. Instead, they were interested in supernova remnant W44, found 100,000 light-years from Earth. Specifically, scientists wanted to measure how much energy was transferred from the stellar explosion to the surrounding gas clouds.

While studying the molecular gas, scientists measured unexpected movement -- velocities and trajectories not possible under normal conditions. Astronomers identified a cloud, dubbed "Bullet," featuring a funnel with rotational speeds of up to 62 miles per second. What's more, Bullet was found spinning in the direction opposite the Milky Way's.

"Its kinetic energy is a few tens of times larger than that injected by the W44 supernova," Masaya Yamada, a graduate student at Keio University in Japan, said in a news release. "It seems impossible to generate such an energetic cloud under ordinary environments."

Researchers developed two theories to explain the unusual molecular gas behavior. They shared their explanations in the Astrophysical Journal Letters.

In the first model, a stream of gas expelled by the stellar explosion passes by a black hole and becomes accelerated by its gravitational pull. In this scenario, the black hole is 3.5 times the mass of the sun.

In a second scenario, the loner black hole comes barging through W44's molecular gas clouds, dragging along the gas and spinning it into a dense stream. In this scenario, the black hole is at least 36 times the mass of the sun.

Only 60 black holes have been found in the Milky Way, but some model suggest there are between 100 million and 1 billion lurking in the galaxy.