"The bottom line is that we've discovered a protein that acts at the earliest step known in centriole duplication," said researcher Bruce Bowerman 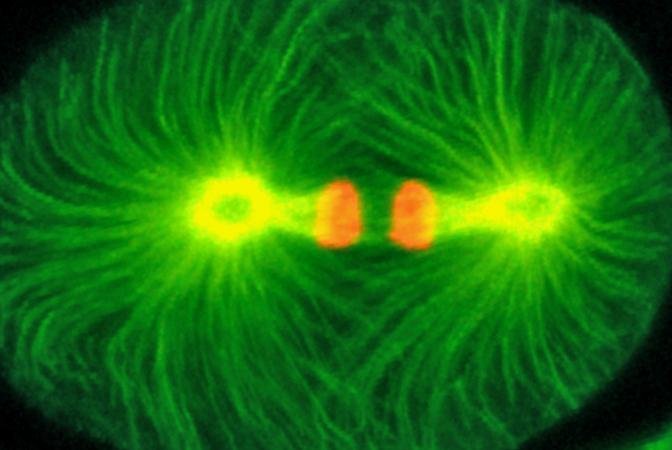 Jan. 30 (UPI) -- The centriole, a tiny paddle wheel-like structure at the nucleus of animal cells, is central to the mechanics of cell division. And new research suggests a protein called sas-7 is vital to the duplication of the centriole.

According to a new paper in the journal eLife, sas-7 is the earliest known protein necessary for cell division.

"The bottom line is that we've discovered a protein that acts at the earliest step known in centriole duplication," researcher Bruce Bowerman, head of the biology department at the University of Oregon, said in a news release. "Finding this protein provides a key advance in our understanding centriole duplication, which is critical to cell division and cilia function in animals. We also have attained new structural insights into the molecular organization of these fascinating structures."

In a new study of the nematode, researchers took an in-depth look at the mechanics of the centriole and its role in cell division. Their observations were made possible by high-resolution transmission electron microscopy.

When a cell divides and proliferates, it relies on the mitotic spindle to provide the two new daughter cells with exact replicas of the organism's genetic code. But before DNA in chromosomes can be copied, the centriole must be replicated. The mitotic spindle is a bipolar mechanism formed by a pair of centrioles.

As the new research revealed, sas-7 is key to this duplication process. When sas-7 is damaged, centriole duplication fails and a cell division must rely on a monoploar mitotic spindle, which can't handle the task.

Researchers aren't exactly sure how sas-7 works, but their work suggests it is the earliest acting protein the centriole duplication process.

"C. elegans has been the one model organism where the pathway of centriole duplication has been worked out and found to be conserved in all animals," Bowerman said.