The latest research suggests the physical capacity for speech has been around for 25 million years.

GRENOBLE, France, Jan. 12 (UPI) -- Researchers have previously suggested the low human larynx is essential to human language, as it allows humans to make vowel sounds. The high larynx, or voice box, of nonhuman primates, the thinking goes, prevents our closest relatives from making the vowel sounds necessary for language.

"Theories of language evolution have developed based on the idea that full speech was only available to anatomically modern Homo sapiens," Thomas Sawallis, a linguist at the University of Alabama, told Scientific American. "We could have had the beginnings of speech 25 million years ago."

Sawallis is co-author of the new study on baboon vocalizations, published in the journal PLOS ONE. The research was led by a group of scientists from Grenoble Alpes University in France.

RELATED Chickens are smarter and more complex than given credit for

The analysis suggests baboons, like humans, use precise control of their tongue position to produce vowel sounds. When researchers dissected the vocal chords, voice box and tongue of two baboons who died of natural causes, they found the primates have tongue muscles comparable to humans.

Until recently, researchers believed the anatomical potential for speech was a relatively modern development, emerging between 70,000 and 100,000 years ago. The latest research suggests the physical capacity for speech has been around for 25 million years.

RELATED Study attempts to explain the scarcity of big brains

RELATED Monkeys have the vocal tools but not the brain power for language
RELATED Number of neurons makes human brain powerful, not structure 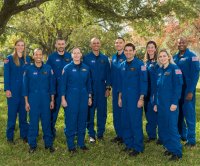 Science News // 14 hours ago
Japanese duo prepare for first tourist flight to space station since 2009
Dec. 6 (UPI) -- Two Japanese businessmen plan to become the first paying tourists to visit the International Space Station since 2009 by rocketing into orbit from Kazakhstan on Wednesday.

Science News // 15 hours ago
Solar cell discovery may help speed development of green energy technology
Dec. 6 (UPI) -- As science looks for better ways to harness electricity from the sun, an explanation for the efficiency of one promising material -- perovskites -- has proven elusive. It's finding could help speed green energy research. 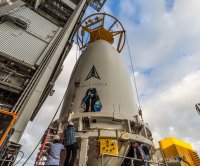