"Cement has gotten a lot of attention for its sizable contribution to global climate change, but this research reinforces that the leading culprit continues to be fossil fuel burning," researcher Steven Davis said.

The cement production process is energy-intensive, but an international team of scientists argues the material works as a carbon sink once poured. File photo by Stephen Shaver/UPI | License Photo

The cement production process is energy-intensive, rightly blamed for a sizable portion of carbon emissions, but an international team of scientists argues the material works as a carbon sink once poured.

"It sounds counterintuitive, but it's true," Steven Davis, an earth scientist at the University of California, Irvine, said in a news release. "The cement poured around the world since 1930 has taken up a substantial portion of the CO2 released when it was initially produced."

Over time, buildings and roads pull carbon from the atmosphere and store it away. Scientists from UCI, the University of East Anglia and elsewhere set out to calculate the carbon storage contribution offered by cement.

First, scientists need to calculate the amount of CO2 emitted by cement production.

Carbon is released into the atmosphere when limestone, calcium carbonate, is turned into lime, calcium oxide, cement's main ingredient. The process is doubly carbon-intensive because breaking down limestone is energy-intensive, requiring the burning of fossil fuels.

As part of their research, scientists estimated 76 billion tons of cement were generated globally between 1930 and 2013, releasing a total of 38.2 gigatons of CO2 into the atmosphere. During the same time, cement sucked up 4.5 gigatons of CO2, almost half the emissions contributed by limestone conversion.

"Cement has gotten a lot of attention for its sizable contribution to global climate change, but this research reinforces that the leading culprit continues to be fossil fuel burning," Davis said.

If engineers can find away to reduce the amount of carbon emitted during the cement production process, the material could ultimately become a net carbon sink.

"We suggest that if carbon capture and storage technology were applied to cement process emissions, the produced cements might represent a source of negative CO2 emissions," added Dabo Guan, a professor at UEA. "Policymakers might also investigate ways to increase the completeness and rate of carbonation of cement waste, for example as a part of an enhanced weathering scheme, to further reduce the climate impacts of cement emissions." 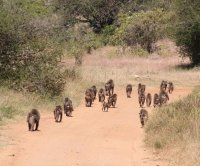 Science News // 3 hours ago
Fitbit-wearing baboons reveal price of social cohesion
July 27 (UPI) -- According to a new study, published Tuesday in the journal Proceedings of the Royal Society B, individual baboons must move at suboptimal speeds in order to maintain cohesion.

Science News // 8 hours ago
'Talking drum' mimics speech patterns of West Africa's Yorùbá language
July 27 (UPI) -- According to a new study, the dùndúns drum -- in the hands of a skilled percussionist -- can accurately mimic the speech patterns of Yorùbá, a tonal language most prominent in southern Nigeria.