The ocean is too deep to access, but scientists are hopeful that the moon ejects ocean spray through polar geysers.

BRUSSELS, Oct. 5 (UPI) -- Subsurface oceans are all the rage. Titan and Enceladus have one. Europa and Pluto probably have one. Ceres might have one. Now, Saturn's moon Dione is getting in on the action.

In a new study, published this week in the journal Geophysical Research Letters, scientists argue gravity data collected by Cassini reveal the presence of an underground ocean.

According to astronomers with the Royal Observatory of Belgium, Dione's icy surface is floating on an ocean lying 62 miles beneath the surface. Data suggest the ocean is a few dozen miles deep.

Scientists believe Dione's ocean has likely been around for the entirety of the moon's existence, offering plenty of time for the development of microbial life. The ocean is too deep to access, but scientists are hopeful that the moon ejects ocean spray through polar geysers like Saturn's other liquid-logged moons, Titan and Enceladus.

"The contact between the ocean and the rocky core is crucial," study co-author Attilio Rivoldini said in a news release. "Rock-water interactions provide key nutrients and a source of energy, both being essential ingredients for life."

Trinh hopes scientists will use the same gravity analysis methods used to study Dione to measure the size and shape of subsurface oceans on other distant bodies.

Science News // 9 hours ago
Study: Air pollution, other factors may influence baby gender in region
Dec. 2 (UPI) -- Air pollution may impact the gender of babies born in a given region, a study published Thursday by the journal PLOS Computational Biology found. 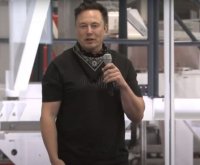