Sea ice shrunk to near-record levels during the summer. This year's minimum extent tied 2007 for second on the all-time low list. Photo by NASA/UPI | License Photo

BOULDER, Colo., Sept. 16 (UPI) -- Only a month ago, scientists were suggesting the rate of sea ice melting in the Arctic had slowed and the 2016 minimum was unlikely to break any records.

Fast-forward to early September, as Arctic sea ice levels reached their summertime minimum, and 2016 has joined 2007 for the second lowest minimum on record.

"It was a stormy, cloudy, and fairly cool summer," Mark Serreze, director of the National Snow and Ice Data Center, said in a news release. "Historically, such weather conditions slow down the summer ice loss, but we still got down to essentially a tie for second lowest in the satellite record."

Melting rates slowed in midsummer as cool, cloudy weather stalled over the North Pole, but that period of respite was bookended by record high temperatures and accelerated melting. Even so, scientists were surprised by this year's minimum.

Researchers suggest a plethora of especially thin ice at the end of the winter -- a winter that also set a record low -- contributed to the record melt. Water temperatures were above average in the upper ocean during the late summer months, contributing to accelerated ice loss to end the melt season.

Researchers say they'll now begin to explore the causes for this year's melt.

Science News // 2 hours ago
New Zealand schoolchildren discover new species of giant penguin
Sept. 16 (UPI) -- In 2006, a group of schoolchildren on a fossil-hunting field trip in New Zealand unearthed the bones of a giant penguin. Now, 15 years later, that flightless bird is getting a name, Kairuku waewaeroa.

Science News // 3 hours ago
Study: Cotton towel best option for homemade face masks
If you're making your own face mask to protect against COVID-19, three layers of cotton towel fabric are best, researchers from India report.

Science News // 12 hours ago
Pet store puppies may be passing drug-resistant bacteria to people
It's hard to resist those big, pleading eyes in the pet store window. But buyer beware. Pet store puppies may infect people with a bacteria for which no common antibiotic treatment exists, a new study warns.

Science News // 20 hours ago
Australian wildfires triggered giant algal blooms thousands of miles away
Sept. 15 (UPI) -- The bush fires that torched Australia in 2019 and 2020 fueled massive algal blooms a few thousand miles away in the Southern Ocean, according to a new study. 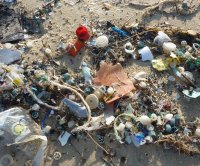