Scientists consider the future of seafood and farmed fish

"It’s 50 to 100 times higher environmental impact to produce on land than in the ocean," said researcher Steve Gaines. 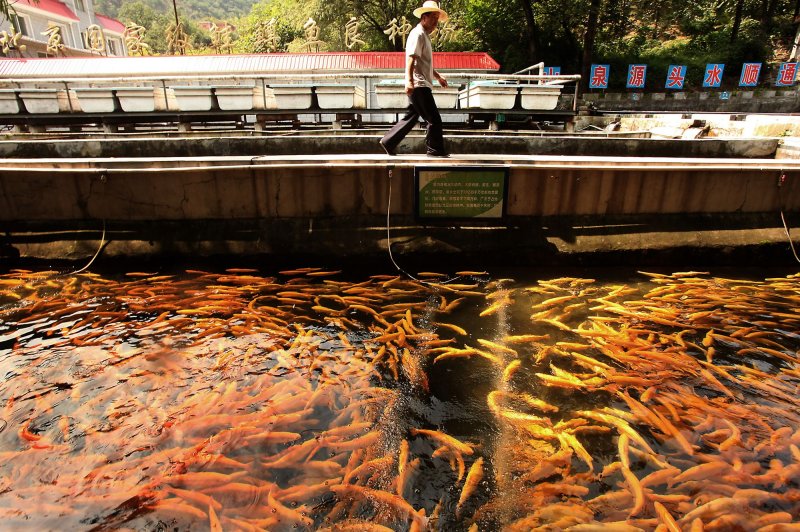 Asia is expected to supply a growing percentage of the world's farmed fish in the coming decades. Pictured, A Chinese worker tends to farm-raised trout at a fish farm in Beijing September 20, 2010. File photo by UPI/Stephen Shaver | License Photo

SANTA BARBARA, Calif., Sept. 14 (UPI) -- What does the future of sustainable seafood look like? That's what scientists at the University of California are asking themselves as they consider how the world will feed its growing population.

Some researchers believe farmed fish is the only viable way to meet the growing demand for animal protein -- a demand that's expected to double over the next 40 years.

UC Santa Barbara's Steve Gaines, a professor of ecology and marine biology, is one of those researchers.

In a recent study, Gaines and his colleagues analyzed the potential of various protein sources: wild-caught fish, farmed fish and farmed land-based animals. The winner was clear. From an economic and environmental perspective, farmed fish is the most sustainable source of animal protein.

But there's a problem, Gaines says. Many consumers, especially in America, think poorly of aquaculture.

"I meet people all the time who say, 'I will only eat wild fish because aquaculture is bad,'" Gaines said in a news release.

Gaines doesn't deny that some forms of aquaculture present environmental problems, but when compared with other forms of commercial fishing and farming, most fish farms are comparatively low impact.

RELATED Can humans learn from the farming prowess of ambrosia beetles?

"There are some really bad ways to do aquaculture, but if you look at best practices, they are dramatically better than any production on land," Gaines said. "In many cases, it's 50 to 100 times higher environmental impact to produce on land than in the ocean."

Even if fish stocks rebound, wild fish can't keep up with the pace of the world's population growth. And even the most sustainable forms of farmed land-based protein would require large amounts of land to grow livestock feed.

"There's no scenario where aquaculture is not part of our food future. If we're going to do it, we should do it well," said Ryan Bigelow, program engagement manager for the Monterey Bay Aquarium's Seafood Watch. "There are good options out there."

"Find out what works and scale that," Gaines said.