"Before our observations, scientists thought it was highly unlikely that we'd detect X-rays from Pluto," said astronomer Scott Wolk. 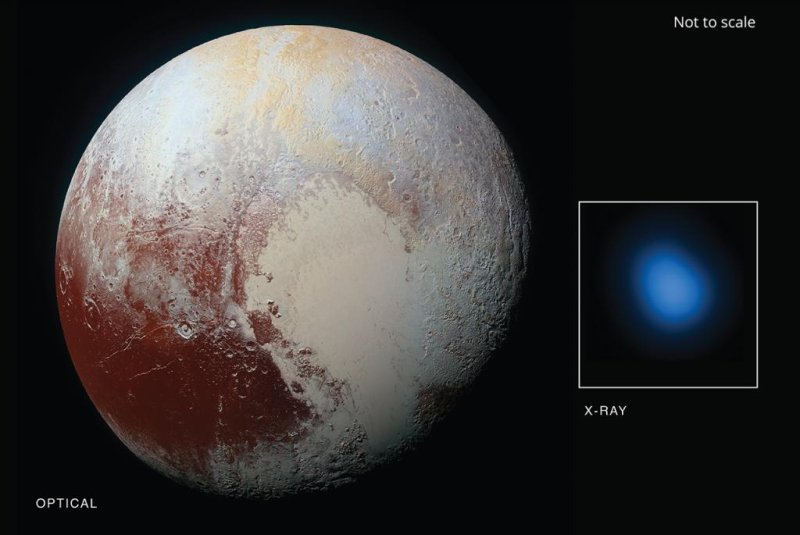 For the first time, astronomers have detected X-rays coming from Pluto. Photo by NASA/CXC/JHUAPL/R.McNutt et al.

"We've just detected, for the first time, X-rays coming from an object in our Kuiper Belt, and learned that Pluto is interacting with the solar wind in an unexpected and energetic fashion," Carey Lisse, an astrophysicist with the Applied Physics Laboratory at Johns Hopkins University, said in a news release.

Pluto is the largest object in the Kuiper Belt, a massive circumstellar disk of small bodies orbiting beyond Neptune.

The phenomenon is new, but it's not entirely unheard of. Gases surrounding asteroids and dwarf planets can interact with solar wind, the streams of charged particles emanating from the sun, to produce X-rays.

But when researchers modeled the interactions between Pluto's thin atmosphere and solar winds using data collected by the space probe New Horizins, the results didn't match up. The X-rays emanating from Pluto are brighter than the model predicted.

"Before our observations, scientists thought it was highly unlikely that we'd detect X-rays from Pluto, causing a strong debate as to whether Chandra should observe it at all," said Scott Wolk, a researcher at the Harvard-Smithsonian Center for Astrophysics. "Prior to Pluto, the most distant solar system body with detected X-ray emission was Saturn's rings and disk."

Researchers suggest the Pluto's X-rays may be explained by a longer than expected comet-like tail created by the interaction between the dwarf planet's gases and streaming solar winds. It's also possible interplanetary magnetic fields within the Kuiper Belt are concentrating a larger than expected amount of solar particles into the region surrounding Pluto.

RELATED Spacecraft catches view of comet being vaporized by the sun

Wolk, Lisse and their research partners detailed their analysis of Pluto's X-rays in the online journal Icarus.

Scientists hope the New Horizons mission will be able to study the interactions between other Kuiper Belt objects and solar wind, so that their data can be once again compared with the observations of Chandra and the X-ray emissions of Pluto.