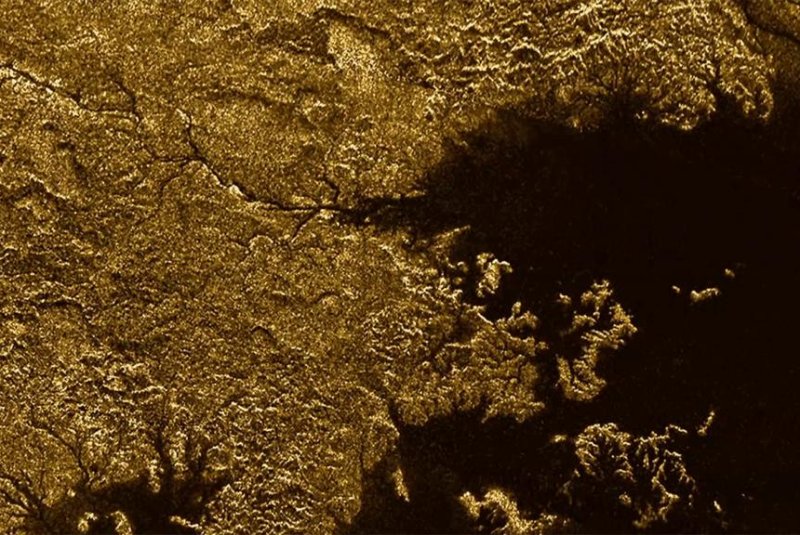 The narrow branches turned out to be steep-walled channels. It's the first direct evidence of liquid-filled channels on Titan.

Scientists have named a portion of the flooded canyon Vid Flumina. The network of narrow canyons features channel walls as steep as 40 degrees. The narrows are less than a half mile wide, with hydrocarbon depths of up to 1,870 feet.

Previous color imagery of the canyon suggested the presence of a liquid similar to Titan's other seas. The new radar data confirmed scientists' suspicions by capturing the glint reflected by the smooth surface of the liquid hydrocarbons -- the same glint seen on Ligeia Mare.

That the narrow channels are so deep suggests the geological process responsible for their formation is either old or acts unusually fast. Researchers believe crustal uplift and sea level change are responsible for the flooded canyons.

"It's likely that a combination of these forces contributed to the formation of the deep canyons, but at present it's not clear to what degree each was involved," Valerio Poggiali, Cassini radar team associate and researcher at the University of Rome, said in a news release. "What is clear is that any description of Titan's geological evolution needs to be able to explain how the canyons got there."

Vid Flumina's channels may have formed much like the Grand Canyon, with the erosion forces of the water cutting deeper as the surrounding land thrust upward. But while some of the canyon channels feature sea levels on par with Ligeia Mare, other channels feature much higher sea levels. More research is needed to explain the evolution of Vid Flumina.

"Earth is warm and rocky, with rivers of water, while Titan is cold and icy, with rivers of methane," added study co-author Alex Hayes, radar team associate and researcher at Cornell University. "And yet it's remarkable that we find such similar features on both worlds."

Scientists described the newly discovered flooded canyons in a paper published this week in the journal Geophysical Research Letters.

Science News // 3 days ago
SpaceX launches Falcon 9 in Florida space coast's second launch of the day
Aug. 4 (UPI) -- Florida's Space Coast on Thursday was busier than it's been in decades, launching two separate rockets on the same day for the first time since the heyday of the Space Race.

Science News // 3 days ago
Bones age, weaken quicker with space travel, research shows
Long periods in space can irreparably damage bone structure and cause parts of the human skeleton to age as much as 10 years, new research reveals.

Science News // 4 days ago
'We're going;' NASA says it's ready for Artemis I unmanned trip to moon
Aug. 3 (UPI) -- NASA Administrator Bill Nelson, sounding like an excited new parent, declared that the agency's Artemis mission is ready to take its first physical steps to return to the moon and sometime later head to Mars.
Advertisement