The latest numbers all but guarantee 2016 will be the hottest year on record, surpassing the record set last year. 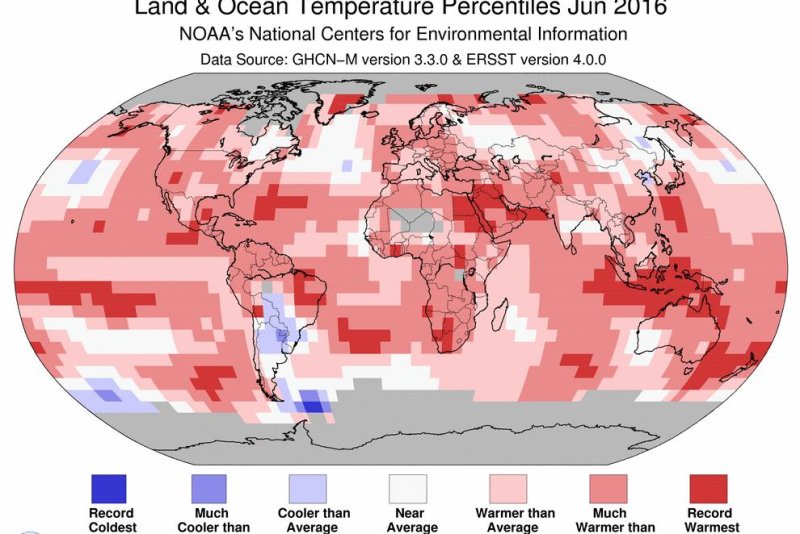 June 2016 was the hottest June on record, ending the hottest half-year in recorded history. Photo by NOAA/NCDC

WASHINGTON, July 19 (UPI) -- Last month was the warmest June in history, keeping alive the streak of warmest months in modern history. That's the latest news from the National Oceanic and Atmospheric Administration.

This year's first six months marked Earth's hottest half-year on record. And the latest numbers all but guarantee 2016 will be the hottest year on record, surpassing the record set last year.

Though warming records continue to be set globally, the Arctic continues to experience the most dramatic climatic change.

"It has been a record year so far for global temperatures, but the record high temperatures in the Arctic over the past six months have been even more extreme," Walt Meier, a sea ice scientist at NASA Goddard, said in a news release. "This warmth as well as unusual weather patterns have led to the record low sea ice extents so far this year."

Science News // 7 hours ago
Dire study finds 40% of animals, 34% of plants face extinction
Feb. 6 (UPI) -- Biodiversity in the United States is in a state of extreme tumult, and a study from nonprofit organization NatureServ paints a dire picture of environmental collapse.

Science News // 10 hours ago
Google to unveil new AI to compete with ChatGPT
Feb. 6 (UPI) -- Google will expand its footprint in the world of artificial intelligence with the new conversational AI technology Bard.

Science News // 2 days ago
Rise in air pollution correlates to creation of impressionist painting, study says
Feb. 4 (UPI) -- Smoggy air during the Industrial Revolution contributed to the creation of impressionism, inspiring painters such as J.M.W. Turner and Claude Monet to develop new painting styles, according to a new study.

Science News // 3 days ago
Early COVID-19 variants remain in deer populations
While COVID-19 variants Alpha, Gamma and Delta are no longer circulating among humans, they continue to spread in white-tailed deer.

Science News // 4 days ago
NASA names first person of Hispanic heritage as chief astronaut
Feb. 2 (UPI) -- Veteran astronaut Joe Acaba made history on Thursday when he was named chief of the Astronaut Office at NASA's Johnson Space Center in Houston.

Science News // 4 days ago
Astronauts use spacewalk to continue upgrade of ISS solar arrays
Feb. 2 (UPI) -- Astronauts from NASA and Japan Aerospace Exploration Agency stepped out from the International Station to begin a spacewalk early Thursday to complete work started by another work team almost two weeks ago.

Science News // 6 days ago
Study suggests dolphins in Brazil are training humans to fish
Jan. 31 (UPI) -- Bottlenose dolphins that have herded mullet for fishermen in southeastern Brazil for more than a century are now helping scientists unlock the deeper mystery behind the collaboration between animals and humans.
Advertisement

Google to unveil new AI to compete with ChatGPT