"We believe these kinds of opportunistic pathogens are more common in marine environment than had been realized before," researcher Suhelen Egan said. 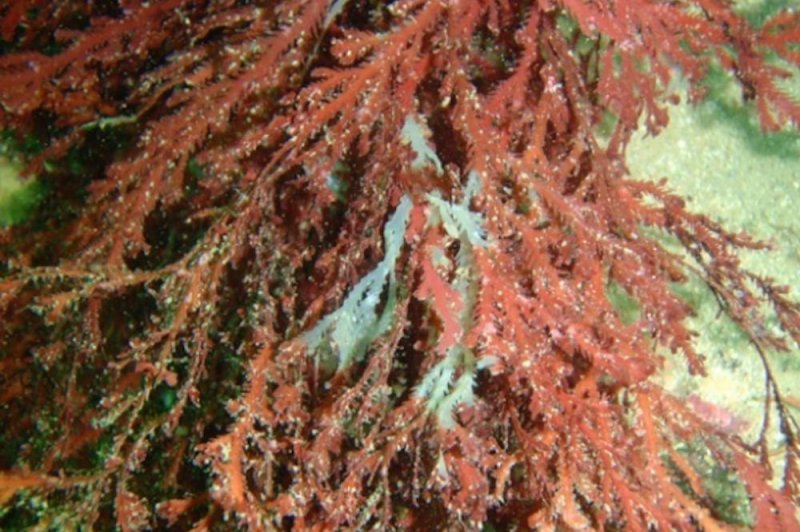 Like coral, seaweeds can become stressed, sick and lose their pigmentation during so-called bleaching events. Photo by Alexandra Campbell/UNSW

"A lot of attention has been paid to coral bleaching, but seaweeds are also affected by temperature-related diseases," researcher Suhelen Egan, a marine biologist at the University of New South Wales in Australia, said in a news release.

The various causes of bleaching disease in seaweeds aren't well understood. To explore the avenues of infection, researchers at UNSW collected multiple samples of red alga, Delisea pulchra, from just off the coast of Sydney.

Roughly half the samples showed evidence of infection, having lost pigmentation among their branches.

"Bleaching reduces the ability of the seaweed to photosynthesise and harvest energy from the sun, and to reproduce," Egan explained. "It also makes them more susceptible to grazing by fish and other herbivores in the ocean."

Scientists identified three strains of microbes in greater abundance on sick seaweed. The three very different types of bacteria were from the Alteromonas, Aquimarina and Agarivorans genera. All have been shown to trigger bleaching disease.

"We believe these kinds of opportunistic pathogens are more common in marine environment than had been realized before," Egan said. "They seize the chance to cause disease when the host is stressed, in the same way that normally harmless, common bacteria can cause disease in people who have weakened immune systems."

Researchers shared their latest findings in the journal Environmental Microbiology.

Science News // 3 hours ago
Russia launches resupply ship to int'l space station
Feb. 9 (UPI) -- Russia successfully launched a Soyuz rocket from Kazakhstan on Thursday with a final destination of the International Space Station where it will deliver some 3 tons of supplies on the weekend.

Science News // 10 hours ago
SpaceX to test-fire all 33 Starship booster engines Thursday
Feb. 8 (UPI) -- SpaceX will embark on a monumental step toward launching Starship on Thursday when it test fires all 33 of its first stage booster's Raptor engines.

Science News // 13 hours ago
Ring discovered around dwarf planet surprises astronomers
Feb. 8 (UPI) -- Astronomers have discovered a ring around a dwarf planet called Quaoar in the outer reaches of the solar system.

Science News // 13 hours ago
Green glow of Comet E3 will be visible next to Mars
Comet E3 has been the hottest topic in the world of astronomy since the start of 2023, and skywatchers will have one more golden opportunity to spot the green comet as it appears extremely close to Mars this weekend.

Science News // 1 day ago
Number of unprovoked shark bites worldwide drops to 57 in 2022
It's a little safer to get into the water: Unprovoked shark attacks dropped to a 10-year low worldwide in 2022, shark watchers say.

Science News // 1 day ago
Secret weapon in preventing next pandemic: fruit bats
Feb. 7 (UPI) -- More than four dozen Jamaican fruit bats destined for a lab in Bozeman, Mont., are set to become part of an experiment with an ambitious goal: predicting the next global pandemic.

Science News // 2 days ago
Dire study finds 40% of animals, 34% of plants face extinction
Feb. 6 (UPI) -- Biodiversity in the United States is in a state of extreme tumult, and a study from nonprofit organization NatureServ paints a dire picture of environmental collapse.

Science News // 2 days ago
Google to unveil new AI to compete with ChatGPT
Feb. 6 (UPI) -- Google will expand its footprint in the world of artificial intelligence with the new conversational AI technology Bard.
Advertisement

Number of unprovoked shark bites worldwide drops to 57 in 2022

Green glow of Comet E3 will be visible next to Mars