Researchers believe Pluto's icy shell is thicker than previously suggested, and that slabs of nitrogen and methane ice help the dwarf planet retain its heat -- slowing the freezing of the subsurface ocean. 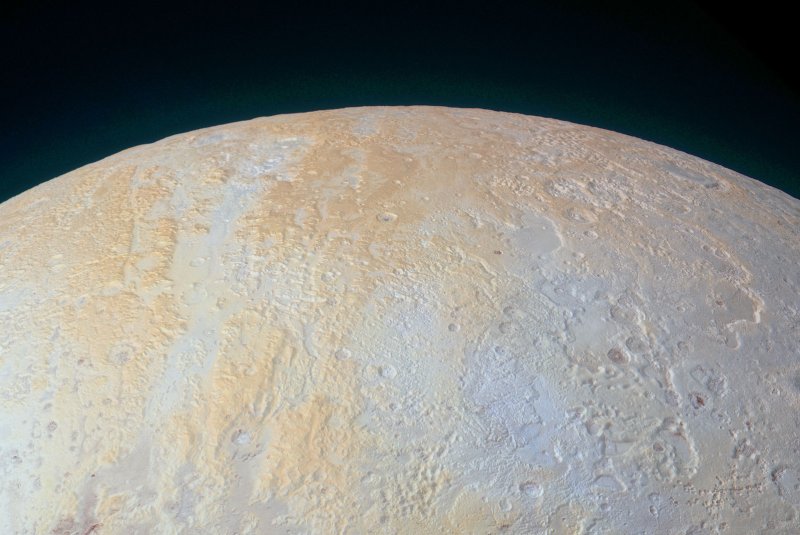 BOSTON, June 21 (UPI) -- Previous studies have revealed the possibility of a subsurface ocean on Pluto -- if not currently, then at least at some point during its planetary history.

Researchers from Brown University are less ambivalent. Their latest study, published in the journal Geophysical Research Letters, suggests a present-day subsurface ocean on Pluto is "most likely."

Scientists at Brown designed a computer model to simulate Pluto's evolution and populated it with data collected by NASA's New Horizons probe. The model showed that if Pluto once hosted an ocean that dried up many millions of years ago, the dwarf planet would have shrunk.

Because there are no signs of shrinking, researchers believe the presence of a subsurface ocean is more likely than not.

"Thanks to the incredible data returned by New Horizons, we were able to observe tectonic features on Pluto's surface, update our thermal evolution model with new data and infer that Pluto most likely has a subsurface ocean today," Noah Hammond, a grad student at Brown and lead author of the new study, explained in a news release.

Scientists first hypothesized that Pluto might host a subsurface ocean after the New Horizons probe returned imagery of the dwarf planet's dynamic landscape. In addition to icy plains and tall mountains, the images also revealed extensive tectonic fractures, the kinds of scars a slowly freezing ocean might create.

Since the first images, scientists have been trying to determine what a subsurface ocean on Pluto might look like. Is it still there? Did it freeze over millions of years ago?

The new model -- called a "thermal evolution model" -- simulated the evolution of Pluto's ocean and found that a fully frozen ocean would feature a unique phase of ice with a reduced volume. But scientists have found no evidence of planetary contraction. Instead, the data suggest Pluto is expanding.

Researchers believe Pluto's icy shell is thicker than previously suggested, and that slabs of nitrogen and methane ice help the dwarf planet retain its heat and slow the freezing of its ocean.

"That's amazing to me," Hammond concluded. "The possibility that you could have vast liquid water ocean habitats so far from the sun on Pluto -- and that the same could also be possible on other Kuiper belt objects as well -- is absolutely incredible."