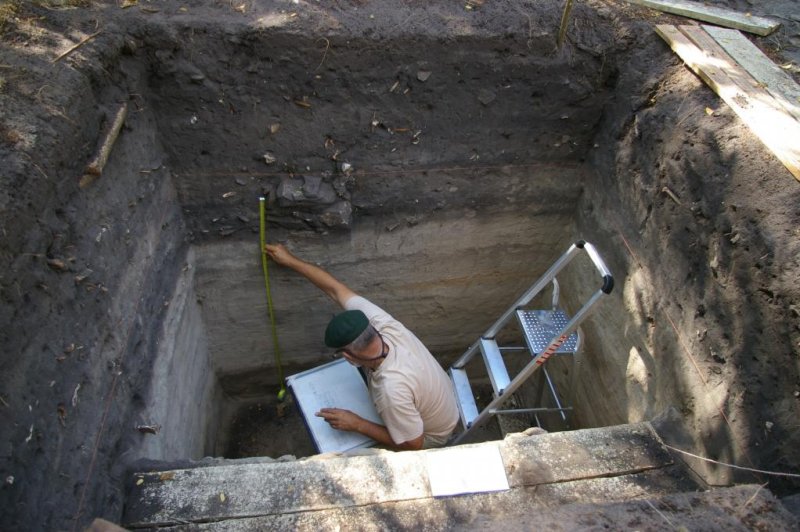 Archaeologists sift for plant remains on the coast of East Africa. Photo by Mark Horton/University of Bristol

BRISTOL, England, June 1 (UPI) -- Researchers in England believe the remnants of ancient crops in East Africa and on Madagascar hold clues to the settlement of the island by people of Southeast Asian origins.

How Southeast Asian peoples came to settle the remote island of Madagascar is one of the enduring mysteries of Indo-Pacific prehistory.

Analysis of ancient crops has offered archaeologists a better sense of when the ancient settlers first arrived. Scientists from the University of Bristol, Oxford University and the University of Queensland collected thousands of seed samples from 18 dig sites in Madagascar, Comoros and along the coast of East Africa.

In soil deposits dated to the 8th and 10th centuries, evidence of rice and mung bean cultivation was found exclusively on the distant islands of Madagascar and Comoros, while indigenous African crops were found only on the mainland coast and nearby islands.

Scientists were able to radiocarbon date individual seed samples, which confirmed the arrival of Asian crops several thousand years ago.

Previous genetic studies proved the people of Madagascar and Comoros share a unique heritage with Malaysians and Polynesians, but the latest analysis is the first archaeological evidence of Austronesian migration westward.

"The origins of Southeast Asian settlers in Africa has long puzzled historians and archaeologists," Mark Horton, an archaeologist at the University of Bristol, said in a news release. "This is the first really clear archaeological evidence that they did indeed make extraordinary journeys across 4,000 miles of the Indian Ocean during the first millennium A.D."

Horton and his colleagues published their latest findings in the journal PNAS.

"We've been able to not only to show for the first time an archaeological signature of Austronesians, we've also shown that it seems to extend beyond Madagascar," added project leader Nicole Boivin, an archaeologist at Oxford. "This is really exciting, and highlights how much we still have to learn about this fascinating migration."

Scientists explain how insects got their wings