"Avulsions are often thought of as the 'earthquakes' of deltas," said researcher Vamsi Ganti. 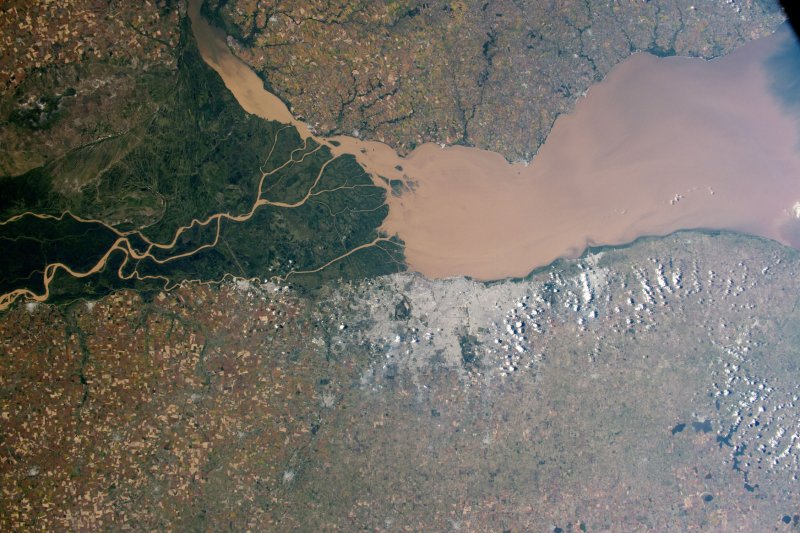 Argentina's Paran River and its surrounding delta are seen from space. New research is helping scientists understand why and how the flow of rivers through a delta suddenly shift. Photo by NASA/UPI | License Photo

LONDON, May 20 (UPI) -- Researchers at Imperial College London are developing a new tool to predict avulsions, the sudden shift in the flow of water through a river delta.

As rivers slow down and begin to meander at the end of their journey from mountain to sea, they spread out, deposit the sediments they've carried and form deltas. While river deltas appear relatively tame, they are tremendously powerful.

A sudden shift in the path of a river through the delta can decimate entire communities.

"Avulsions are often thought of as the 'earthquakes' of deltas because of the damage they wreak," researcher Vamsi Ganti, an earth scientists at ICL, said in a news release.

RELATED New Orleans is sinking; new map reveals where and how fast

"Sudden and unpredictable changes in the course of a river can rapidly flood neighboring land, meaning that people often have to abandon their communities before they are swallowed by the river system," Ganti explained. "Our research confirms the factors that make these avulsions occur, which could ultimately help people around the world make their communities more secure."

Ganti and a team of scientists from ICL and the California Institute of Technology built a model delta in the lab to study how changes in the river and delta can trigger an avulsion.

The model allowed researchers to simulate a variety of flood conditions and flood patterns, condensing geologic processes that normally take hundreds or thousands of years to play out. Their research confirmed the importance of flooding and lobes in dictating delta shape and movement.

RELATED Flooding along the Mississippi seen from space

Previously, researchers have noticed that each delta has a unique lobe length. The lobe is the leaf-like pattern made by a river's deposited sediment. Once the lobe reaches its uniform length, an avulsion occurs and a new lobe is created.

Testing in the lab proved that a constant pattern of flooding was key in encouraging the uniform lobe length, and that a delta's lobe length corresponded to the gradient and the depth of the river.

The researchers hope to tease out these relationships so they can predict future avulsions. They detailed their latest findings in the journal Science Advances.

Science News // 17 hours ago
Long-duration space flight equal to decade of bone loss in astronauts, study says
July 1 (UPI) -- Scientists have long known that astronauts lose bone density while in space, but a study published this week found they only partially recover this loss one year after returning to Earth.

Science News // 1 day ago
Milky Way to set backdrop for summertime comet, meteor showers
July offers a slate of astronomical sights for young stargazers, those experienced with a telescope and everyone in between.

Science News // 4 days ago
Miner unearths nearly complete mummified baby woolly mammoth in Canada
A young miner called for backup when his front-end loader unexpectedly struck something in the Canadian permafrost last week on the first day of summer in the Northern Hemisphere.