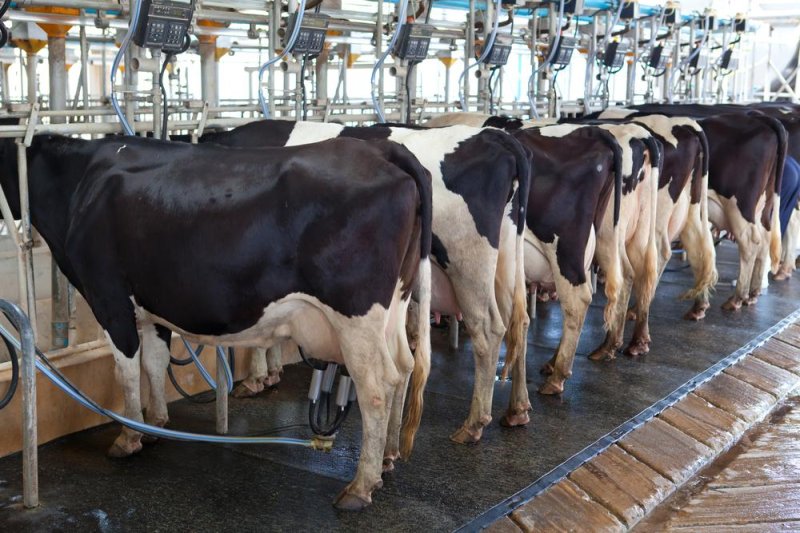 Dairy cows with access to low-flow sprinklers produced nearly as much milk as those give access to high-flow sprinklers, while reducing water usage as much as 75 percent. Photo by WitthayaP/Shutterstock

Recently, researchers with the University of California, Davis set out to figure out whether dairy farmers in their home state are wasting water trying to keep their cows cool.

Many dairy farmers use high-flow sprinkler systems to keep the cows cool and happy during periods of drought and high temperatures. The thinking goes: happier cows are more productive. For this reason, water usage on dairy farms rises dramatically in the summer months.

To see if there is a better, more efficient way to keep cows cool, Chen and her colleagues measured the effects of different sprinkler systems -- high-flow versus low-flow -- on behavioral, physiological and production responses in cows.

Though cows given access to high-flow sprinklers had slightly lower body temperatures on average and produced a bit more milk, the differences were small. Behavior patterns were unaffected by sprinkler type, suggesting the cows were happy either way -- undisturbed by the reduced flow.

The findings suggest low-flow sprinklers can offer similar benefits while cutting water use by nearly 75 percent.

"Future work should evaluate the degree of heat abatement that can be achieved with even less water," Chen said. "An alternative to reducing sprinkler flow rate may be to apply higher flow rates for a shorter duration."

The new research was published this week in the Journal of Dairy Science.

Science News // 12 hours ago
Watch Live: NASA Artemis 1 rocket begins pre-launch rollout
Aug. 16 (UPI) -- NASA plans to roll out its Space Launch System rocket on Tuesday ahead of its premiere flight set for later this month. The uncrewed test flight is part of the plan to return man to the moon.