"We're holding them in a superconducting structure that allows us to interact with them, on much faster timescales, and much more sensitively," researcher David Schuster explained.

A trio of researchers at the University of Chicago, have managed to incorporate electron-trapping technology into a resonator used in quantum computer circuitry. Grad students Gerwin Koolstra and Ge Yang, pictured left and right, stand on either side of David Schuster, an assistant professor in physics. Photo by Rob Hart

CHICAGO, May 11 (UPI) -- Researchers have made a significant step in the development of a complete quantum computer by trapping and manipulating the ideal quantum bit -- the electron.

Scientists at the University of Chicago were able to isolate electrons by coaxing them to levitate just above the surface of liquid helium that had been cooled to extremely low temperatures.

"A key aspect of this experiment is that we have integrated trapped electrons with more well-developed superconducting quantum circuits," lead author Ge Yang explained in a news release.

The breakthrough was published this week in the journal Physical Review X.

"It's a very important step along the way to being able to study single electrons and make those electrons work as quantum bits," added co-author David Schuster, an assistant professor of physics at Chicago.

Electrons are ideal carriers of quantum information, but their potential is ruined when they're interfered with as they travel through various materials. When they levitate, however, they're unencumbered quantum computing potential can be realized.

Researchers have known about helium's unique effect on electrons, but this is the first time they've taken advantage of it for the purposes of quantum computing.

"We're holding them in a superconducting structure that allows us to interact with them, on much faster timescales, and much more sensitively," Schuster explained.

Researchers incorporated the helium and trapped electrons into a resonator, which bounces an electric charge between a row of mirrors several hundred times until it's strong enough to interact with the trapped electrons and produce a quantum bit, or qubit.

The electrons are produced by a tungsten filament. They boil off and become trapped on the surface of liquid helium. Aluminum wires keep the floating electrons trapped in place as they wait to travel along the circuit, which is etched into a layer of niobium deposited atop a bed of sapphire.

Right now, researchers are working with roughly 100,000 trapped electrons -- an amount too large to control via quantum mechanics. The goal is to be able to pare that number down to one.

"We're not there yet, said Schuster. "But we're pretty close."

RELATED New state of matter detected in a two-dimensional material 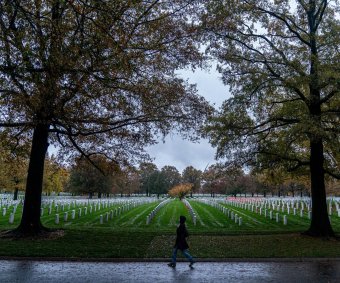