The ex-president has already served nearly three-quarters of his 7-year sentence. 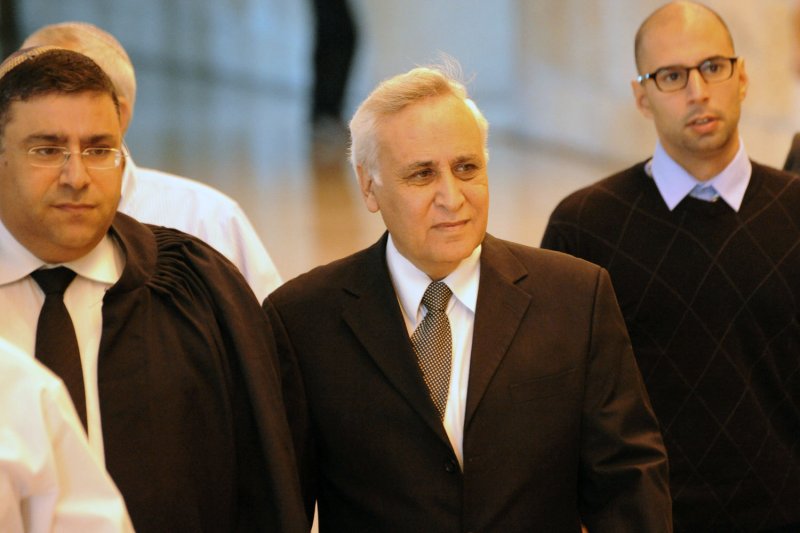 Former Israeli President Moshe Katsav, has been serving a seven-year prison sentence for sexual assault since December 2011. He and his family are appealing for clemency from the current Israeli president. Photo by UPI/Debbie Hill | License Photo

JERUSALEM, May 8 (UPI) -- Moshe Katsav, former president of Israel, has been jailed since December 2011, serving time for his conviction on two rape charges. However, the 70-year-old and his family are hopeful his time in jail will be cut short by clemency.

Katsav and his lawyers have officially lobbied Israeli President Reuven Rivlin for a pardon. According to the Times of Israel, Rivlin's legal team is currently reviewing the request.

Though prison officials have not reported any signs of mental distress or requested the assistance of a psychiatrist, Katsav's family says the former leader's mental health is deteriorating as a result of his imprisonment.

Katsav's wife Gila has met twice with Rivlin about a possible pardon for her husband. Reports suggest Rivlin is unlikely to grant his predecessor clemency -- and has told Gila Katsav as much.

The bid for clemency comes after the Israel Prisons Service parole board denied Katsav a bid for early release in April. The parole board cited Katsav's continued denial of the rape charges as a primary reason for their decision.

The ex-president has already served nearly three-quarters of his 7-year sentence, and even if not pardoned, is due to be released in early 2018.

Science News // 8 hours ago
Puerto Rico's coquí is the Caribbean's oldest frog
April 8 (UPI) -- The discovery of a tiny arm bone suggests the coquí frog has been living in the forests of the Caribbean for at least 29 million years.